Knicks use huge first half to slide past Timberwolves 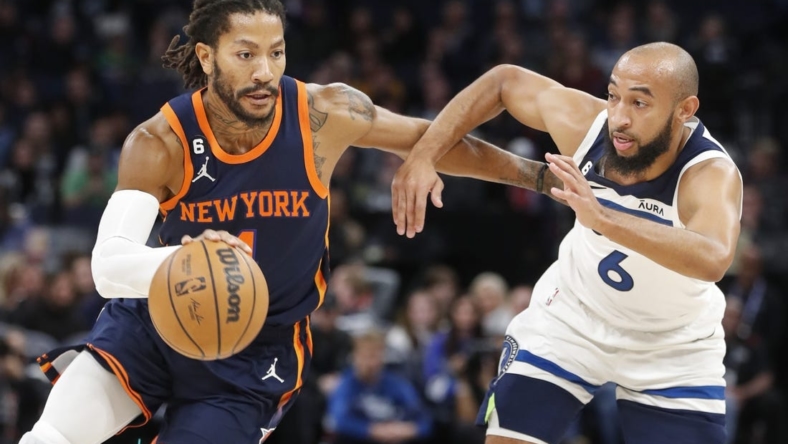 Julius Randle scored a season-high 31 points, and the New York Knicks rode the cushion from a 76-point first half to down the Minnesota Timberwolves 120-107 Monday in Minneapolis.

Randle’s best offensive performance of the season stemmed from a first half in which he hit six 3-pointers — accounting for all of his made field goals before intermission — to pace a torrid Knicks offense.

New York scored 38 points in each of the first two quarters, building a 24-point lead by the break.

Jalen Brunson and RJ Barrett finished with 23 and 22 points, respectively, with Barrett’s and-one play to open the second half extending New York’s advantage to a game-high 27 points. Barrett scored 13 points after halftime.

Minnesota outscored New York in both the third and fourth quarters, but never could cut the deficit to any fewer than the final 13-point margin.

Karl-Anthony Towns led Minnesota with 25 points on 9-of-12 shooting from the floor, but the backcourt duo of D’Angelo Russell and Anthony Edwards combined to shoot just 9 of 26 from the field.

Edwards finished 1-for-7 from 3-point range for his 16-point night. Russell shot 4 of 10 from beyond the arc, but was one of only two Timberwolves to make more than one 3-pointer.

Jaylen Nowell shot 2 of 3 from deep and finished with eight points off the bench.

The Knicks’ 19-for-48 performance from outside made the difference against Minnesota’s dismal 11-of-41 shooting. Randle finished 8-for-13 from downtown, while Obi Toppin came off the bench to hit 3 of 8.

Toppin finished with 15 points and grabbed seven rebounds. Randle led the Knicks with eight rebounds, and Brunson dished eight assists in the win.

Towns grabbed a game-high 13 rebounds and made seven assists. Russell passed for eight assists in the loss, as Minnesota dropped the fourth decision in its last five outings.