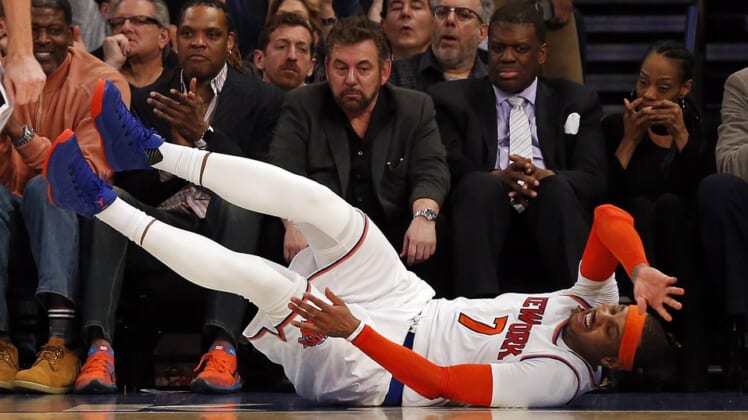 Embattled New York Knicks owner James Dolan has been in the news for all the wrong reasons. A spat with former Knicks great Charles Oakley a while back didn’t paint Dolan in the best of lights.

With his team struggling for relevance in the broader NBA, Dolan was just caught on a hot mic kicking a fan out of a Knicks game at Madison Square Garden for heckling him with “sell the team” chants.

James Dolan is incredibly soft. In his feelings when a fan voiced an opinion and yes this is an opinion how disconnected can you be?! I hope the Garden is filled with nothing but “Sell the Team” chants as long as he owns it. pic.twitter.com/DWgJukfmwX

It goes without saying that Dolan is not the most-popular figure in the Big Apple. With various reports suggesting that he might be looking to sell the team, Dolan just took to the public to decry that notion.

Knicks owner James Dolan, on ESPN Radio: "Just for the record: I am not selling the team and I am not quitting."

But from a business standpoint, it makes no real sense for any NBA owner to sell his/her team. Business is booming in a big way. Revenue continues to skyrocket at record clips.

Meanwhile, Dolan’s Knicks remain the most-valuable franchise in the Association at $4 billion. It’s a number that’s going to continue to climb regardless of the team’s on-court performance.