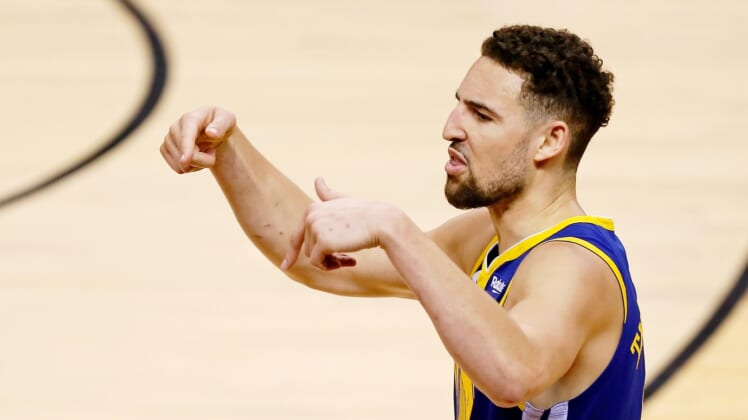 Golden State Warriors guard Klay hompson was one of the NBA’s most durable players. After fighting through injuries and posting gaudy states nearly every night, Thompson’s durability finally came to a head in the 2019 NBA Finals against the Toronto Raptors.

The big picture: As Klay Thompson prepares for his NBA return after missing a year with a torn ACL, here is a five-year stats projection with the Warriors.

Since being drafted 11th by the Warriors in 2011, Thompson has always been a sharpshooter. While he isn’t a facilitator and is average on the glass, Thompson made his name as one of the premier “3-and-D” players in the NBA.

His ability to properly position himself on defense is key for the Warriors. He uses his size and length to obscure opposing guards’ vision and he’s agile enough to stay in front of shiftier players. Taking offense and defense into account, Thompson:

Thompson knows and accepts his role in Steve Kerr’s system. He’s a more-grounded shooter that uses his frame to disrupt shooters. That’s why he might have an easier time getting back to game rhythm – be it off the bench or as a starter.

NBA players who tore their ACLs

There have been a total of 99 players that have torn their ACL. Among that group, 17 were around 29-30 years old at the time of their injury. Out of that sample, eight were either a shooting guard or small forward – positions that Thompson has played or can potentially play.

Only two players were able to make a return and post solid numbers:

That said, there are more players who retire after such a devastating injury.

How Thompson will play for the Warriors

In a sense, Thompson is an amalgamation of the aforementioned players’ styles and builds. That’s why in the next five years, Thompson:

As Thompson gets older, the best comparison would be Ray Allen. While Allen was an athletic guard early in his career, he focused on his 3-point shooting and accepted coming off the bench, allowing him to age gracefully. Because Thompson is a phenomenal shooter, his transition to the bench should be smooth when his time comes.

The bottom line: Thompson will be effective for the Warriors until he retires

Regardless of what happens with Thompson, one thing is for certain: he will remain a threat on the court. Like Stephen Curry, his incredible shooting will make it difficult for defenders to sag off, no matter how old he is.

Because of his more down-to-Earth approach, he can continue to be an effective player on both sides of the ball. Thompson doesn’t need to have the ball in his hands to be a problem for whoever is guarding him. Add his silky-smooth jumper and ability to move off the ball and Thompson can potentially go off for 40 or 50 on any given night.

Defensively, Thompson can continue to use his size to his advantage. So long as he retains his lateral mobility, he shouldn’t have a hard time guarding opposing guards and small forwards. In the end, Thompson will be a weapon the Warriors can deploy until he retires.