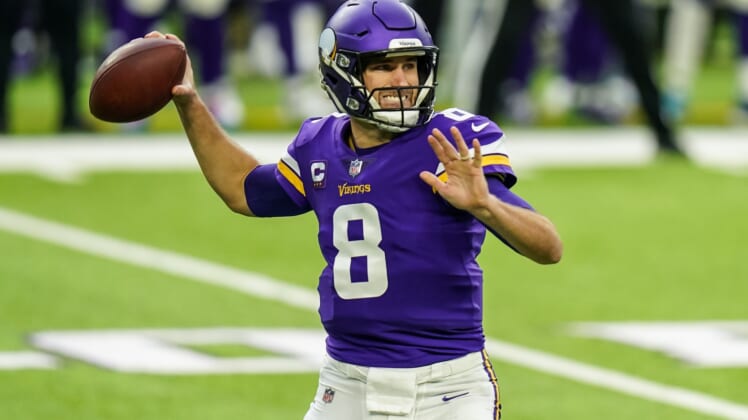 The Minnesota Vikings got off to a horrible 1-5 start. Fans were doing everything from calling for general manager Rick Spielman and head coach Mike Zimmer to be fired to trading half the roster away. Quarterback Kirk Cousins has been on the receiving end of a ton of criticism since becoming a Viking, so he was already behind the eight ball.

Having thrown 10 interceptions in his first six games, Cousins led the league in picks at the time. The Vikings had just lost a game to cap off that stretch against the previously winless Atlanta Falcons, 40-23.

Skeptics around the league were beginning to speculate on Cousins’ future, projecting quarterbacks like Trey Lance, Justin Fields, and Zach Wilson as their 2021 first-round draft pick. Rightfully so, because at 1-5, the future looked bleak. Looking ahead to a younger, more mobile quarterback provided a sense of optimism for fans to dream about as they complained about Cousins’ ineffectiveness.

So much for that. Kirk Cousins went full “YOU LIKE THAT!?” mode on all the haters.

Kirk Cousins: The captain who righted the Vikings’ ship

Since the Vikings’ Week 7 bye, they’ve surged to a 5-1 record, losing only once to the Dallas Cowboys in that span. That was attributable to a letdown more than anything, and the fact that Dallas was desperate to get its way back into contention in the horrid NFC East.

Otherwise, Minnesota was spectacular, particularly picking up the slack on offense. Dynamic running back Dalvin Cook had a couple of phenomenal 200-yard games to help the cause, and rookie wideout Justin Jefferson continued to dominate defenders, further vindicating the Stefon Diggs trade. But best of all? Captain Kirk won back the hearts of the Vikings faithful. It’s clear as day to see the improvement Cousins made individually since Minnesota’s idle week.

Maybe he’s getting excited for basketball to start back up as many of us are, but in any event, Cousins has been ballin’. For all the criticism he’s received over the years, particularly upon his arrival in Minnesota, his stats suggest he hasn’t been all that bad throughout his career as is widely believed.

Cousins has actually been pretty good. The 32-year-old veteran now has at 25 or more passing touchdowns in each of his last six seasons, which is the longest active streak in the NFL, and a longer streak than anyone currently in the Hall of Fame.

Granted, he has a very talented group of pass-catchers to work with. Wide receiver Adam Thielen is third in the NFL with 12 receiving touchdowns, and Justin Jefferson appears to be in line to win Offensive Rookie of the Year. Beyond the receiving corps, tight end Kyle Rudolph has gone to two Pro Bowls, and Cook is a sure-handed threat out of the backfield in his own right. His 1,564 all-purpose yards are tops in the NFL and Cook is on pace to gain over 2,000 yards from scrimmage as of this writing.

In Weeks 11 through 13 in particular, Cousins was on fire, with three consecutive games throwing for three or more scores and 300-plus passing yards. As we know all too well, though, the NFL is very much a “what have you done for me lately” league. The end of the season — as the Vikings make a completely improbable push for the playoffs — will be telling in terms of Cousins’ competitive mettle, not to mention how the larger public perceives him as a player.

With the exception of their post-bye upset win over Green Bay, none of the Vikings’ six wins have come against opponents with winning records entering Week 14. Playing three of four games on the road isn’t so bad when few to zero fans are allowed in the stands, depending on the venue. It also helps that Minnesota has a cakewalk in the regular-season finale against the Detroit Lions, which will be a must-win game if the postseason is still within reach. Before then, though, it’s a tough road to go.

The Buccaneers’ defense is no joke. Coordinator Todd Bowles is known for his exotic schemes and is sure to have something special served up for Cousins following Tampa Bay’s bye. It’ll fall largely on Cousins to win his head-to-head matchup with Tom Brady, because the Bucs happen to have the NFL’s top-ranked rush defense, which means the passing game must be on point for Minnesota to keep rolling.

Although the Bears are reeling right now amid five straight losses, their defense, too, is a formidable test for Cousins and Co. — and how about a trip to New Orleans to take on the NFC’s top-seeded Saints? Whew. What a brutal fourth quarter of the schedule.

Speaking of fourth quarters: One notable, juicy subplot to this 2020 Vikings-Cousins redemption narrative is how the signal-caller is beating back the notion that he can’t execute in the clutch. Cousins has three game-winning drives this season. He has a QB rating of 132 in the 4th quarter this season while throwing 11 touchdowns with one interception in the final frame.

Cousins has also won in prime time on Monday Night Football in Week 10 against the Bears. He’ll have to do it again on Christmas Day, and what a gift that would be for Minnesota indeed.

As the Vikings face their final four games, the spotlight will continue to heat up on Cousins. He accepted that the moment he signed his three-year $84 million contract with the Vikings. If he continues to perform like he has in his past six starts, the Vikings should be able to sneak into the playoffs.