Los Angeles Clippers star forward Kawhi Leonard has a $36 million decision to make here ahead of the start of NBA free agency.

For the past several months, it’s been a foregone conclusion that the 30-year-old Leonard would opt out of his deal and become a free agent — only to re-sign with the Clippers on a max contract.

Once news broke on Tuesday that Leonard had surgery to repair a partially torn right ACL he suffered in the NBA Playoffs, questions arose about whether he would in fact opt out.

Right now, it appears that nothing has changed on this front. Kawhi Leonard will hit free agency when it opens early next month.

“One executive I spoke to following the announcement that Kawhi had surgery to repair the partially torn ACL said he thinks no matter what, Kawhi would opt out, especially given the fact that Kevin Durant got the max after he suffered a ruptured Achilles,” Michael Scotto of HoopsHype reported recently. “That executive also noted that Kawhi’s going to hit the 10-year mark for his years of service, which plays a role in upping his max contract as well.”

Reports following Tuesday’s news concluded that Leonard will likely still miss nine to 12 months of action. The recovery time is expected to be similar to a “full ACL reconstruction,” according to some doctors with knowledge of the injury.

These experts point to the same injury Brooklyn Nets guard Spencer Dinwiddie suffered early in the 2020-21 NBA season. The pending free agent did not see action again throughout the remainder of the season after suffering a partially torn ACL back in late December.

It’s possible this could lead to certain teams opting to go in another direction even if it becomes clear that Leonard will not return to the Clippers in free agency.

Kawhi Leonard will be the top NBA free agent

Even with the two-time NBA Finals MVP likely being out through the start of the 2022 calendar year (and then some), there’s no question that he will be the top free agent on the market once all is said and done.

We’re talking about a still-elite two-way player who averaged 24.8 points, 6.5 rebounds and 5.2 assists for the Clippers a season ago. He also shot 51% from the field and 40% from distance while earning NBA All-Defensive Second Team honors. 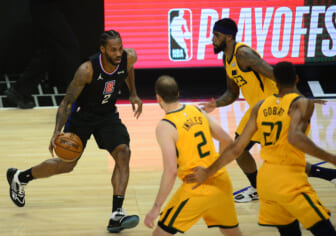 Contending teams are not going to be too concerned over the ACL injury Kawhi Leonard suffered. As Scotto noted in his report, Kevin Durant received a max contract with the Brooklyn Nets back in the Summer of 2019, weeks after suffering a torn Achilles in the NBA Finals.

The expectation here is that Leonard will still re-sign with the Clippers on a max contract. Sure teams like the Dallas Mavericks are going to be big-time players for his services. But reports over the past several months have pointed in the direction of a return to his native Southern California.