Kansas City Royals are overshadowed in AL Central, but are poised for 2021 rise 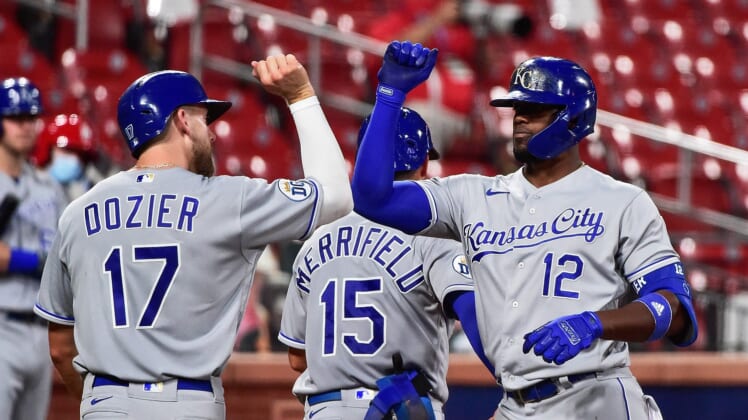 The Kansas City Royals have a lot going for them on their 2021 big-league roster. The problem? They’re blocked by three of their American League Central rivals from potentially making a lot of noise.

Nevertheless, Kansas City should be held in high regard as a team to watch this coming season.

The Kansas Royals have a compelling lineup and rotation

Last season the Royals offense finished 20th in MLB in home runs (68) and OPS (.711) and tied for 24th in runs (248). This is a unit capable of much more. Albeit such a notion derives from the campaigns the bulk of their roster put together a season ago, the collective 2020 output was more of an anomaly than reality in regard to their upside.

Whit Merrifield is one of the best pure hitters in baseball, a season removed from posting 206 hits and a .302 batting average. Jorge Soler blasted 48 home runs in 2019. Hunter Dozier posted an .870 OPS in said season. Salvador Perez is one of the premier catchers in the sport and coming off a season where he posted a .333 batting average, a .986 OPS and 32 RBIs. Adalberto Mondesi and Nicky Lopez are respectable at the middle infield positions.

Santana is a considerable power threat from both sides of the plate and a year removed from posting a .911 OPS. Benintendi has a compact swing and was a steady hitter and slick fielder across his three full seasons starting in left field for the Boston Red Sox. Healthy versions of both players enhance the Royals offensive attack.

Starting pitching has been the Royals’ chronic weakness. Fortunately for the Kansas City faithful, that aspect of their ball club appears to be turning a corner. Brad Keller is fresh off an encouraging season, where he finished hitters with his primary three-pitch arsenal (fastball, slider and sinker) and kept runners off the basepaths. The 25-year-old right-hander posted a 2.47 ERA, a 1.02 WHIP and held opponents to a .202 batting average.

Meanwhile, young starters Brady Singer and Kris Bubic held their own starting every fifth day in their first MLB seasons.

This looks like a rebuilding club on the cusp of being a surprise playoff team. In actuality, they have a limited chance at achieving that — and it’s more to do with three other loaded teams in their division.

The Minnesota Twins and Chicago White Sox are World Series contenders, which puts a wrench in the Royals’ plans to contend for the postseason.

The Twins are loaded around the diamond, as they have a plethora of vibrant bats and savvy fielders. Meanwhile, their starting rotation received a boost in 2020 with Kenta Maeda’s Cy Young Award-caliber season. Healthy versions of Maeda, Jose Berrios, Randy Dobnak and free agent signee J.A. Happ makes for a reliable starting rotation.

Chicago has an exuberant and ever-improving offense, accompanied by a well-versed starting rotation headlined by ace Lucas Giolito. This offseason they added a stout reliever in Liam Hendriks and an old friend in outfielder Adam Eaton. Coming off their first playoff appearance since 2008, the best is yet to come for these White Sox.

Sure, they’re not as sexy as the Twins and White Sox. At the same time, Cleveland boasts a balanced roster that can at least compete for an AL Wild Card seeding thanks to their abundance of budding pitchers, starting with Shane Bieber, and positional depth. That’s true even after the team traded five hallmark players over the last two years (Trevor Bauer, Corey Kluber, Mike Clevinger, Francisco Lindor and Carlos Carrasco).

Which one of the aforementioned teams are the Royals better than or have a chance of finishing ahead of?

They certainly seem capable of challenging Cleveland given its massive talent exodus. That said, the Indians’ fundamentally-sound depth chart and pitching from top to bottom seems like a better model for success than a trendy offense with a rotation that’s heavily reliant on the growth of multiple young pitchers like Kansas City has.

Can Kansas City Royals challenge their division rivals amid rebuild?

If the Royals finish the 2021 MLB season with 75 wins, it doesn’t mean they’re a bad team or that they have to take a stern look at themselves in the mirror. They’re simply not better than their divisional rivals. That 46.3% winning clip would actually be a step up from their 26-34 mark from 2020.

Plus, the AL East has three legitimate playoff contenders in the Tampa Bay Rays, New York Yankees and Toronto Blue Jays. A playoff berth, let alone a division crown, is a stretch for the Royals.

Kansas City has a lot to be optimistic about between its lineup’s firepower and pitching upside, but there are some fair questions to ponder.

Can starters not named Brad Keller succeed over a 162-game season, rather than a two-month trial? Can Keller build on his 2020 campaign? If the rotation as a collective whole struggles to provide length, will the bullpen get worn out midway through the season? Are the Royals sellers at the MLB trade deadline if the season goes south?

Barring a string of unfortunate injuries in the AL Central, the Kansas City Royals have little margin for error in 2021, which is an immense challenge for any young, rebuilding team.

With all that said, there’s still reason for optimism in Kansas City. The offense should be as good as it’s been in years, and even league-average pitching should keep the Royals in most games. Who knows, maybe the small sample size of a 60-game season and heightened expectations on the White Sox will actually cause Chicago to step back.

The Miami Marlins made the 2020 playoffs, so crazier things have happened very recently. If the Sox and Lindor-less Indians aren’t up to the task, there’s a sliver of an opening for Kansas City to really make a splash in 2021.