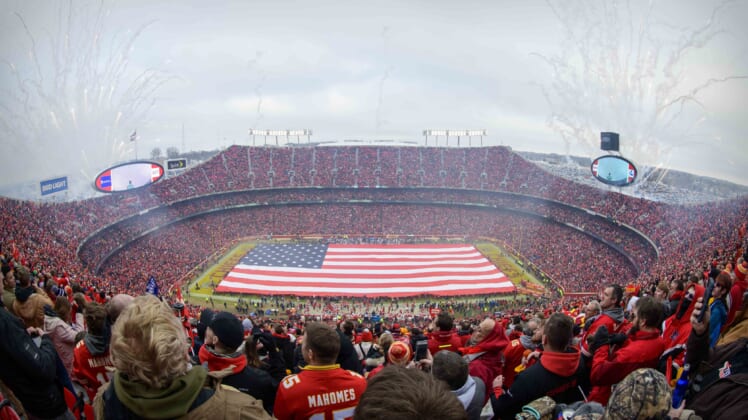 Jan 12, 2020; Kansas City, MO, USA; A general view of the stadium and fans before the game between the Kansas City Chiefs and the Houston Texans in a AFC Divisional Round playoff football game at Arrowhead Stadium. Mandatory Credit: Denny Medley-USA TODAY Sports

When the Kansas City Chiefs take the field against the Houston Texans for the NFL Kickoff Game, there will be fans in the seats. However, due to the COVID-19 pandemic, there won’t be nearly as many fans allowed in Arrowhead Stadium.

With three weeks left until the 2020 NFL season kicks off on Sept. 10, the Chiefs unveiled their plans for fan attendance at their stadium.

The Chiefs will take the field on Thursday, Sept. 10, as the defending Super Bowl champions with an incredible ceremony before the game to honor their title. Unfortunately, the atmosphere won’t quite be the same after Monday’s announcement.

Following guidelines set by the NFL and local health officials, the Chiefs are reducing the stadium capacity at Arrowhead Stadium to approximately 22% of its normal standard.

The decision means the 76,000-seat football stadium will hold fewer than 20,000 fans when the Chiefs begin their season. It also marks a dramatic drop for a club that ranked sixth in average home attendance (74,000) during the 2019 season, according to ESPN.

It’s part of a series of changes the organization is making to follow social-distancing protocols and decrease potential exposure for fans and team personnel.

It marks the latest in a wave of announcements by NFL teams regarding stadium attendance for the upcoming season.

Will NFL fans be able to attend games this season?

While the Chiefs will allow some fans to attend their games to begin the season, several NFL clubs have banned attendance entirely. The New York Giants, New York Jets, Las Vegas Raiders and the Washington Football Team all unveiled plans to keep fans away from the stadiums at the start of the regular season.

In a year where the NFL could lose billions of dollars in potential revenue by playing in empty stadiums, teams banning fan attendance will suffer the biggest financial hit this season.

It’s likely a reason why many other clubs have announced they would permit limited crowds this season. Most notably, the New England Patriots, Green Bay Packers and Baltimore Ravens and Dallas Cowboys have all revealed plans for a limited stadium capacity this season.

NFL teams are bracing for the 2021 salary cap to take a hit next season, in an effort to soften the blow from the lost revenue this season. However, the league is already working on ways to bring in more money.

If the college football season is canceled, the NFL is contemplating adjusting the 2020 schedule to play more games on Saturdays. As part of the new CBA, the league already expanded the playoff field and the rights to broadcast the games will generate even more revenue.

Despite the concerns about the coronavirus, the NFL remains confident a full 2020 season will be played. As long as that happens, the league should do just fine financially.