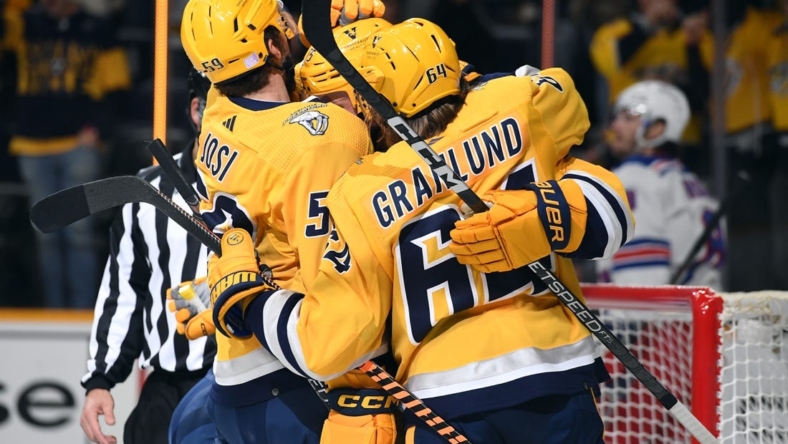 Juuse Saros made 34 saves, Juuso Parssinen scored in his NHL debut and the Nashville Predators held off the visiting New York Rangers for a 2-1 victory on Saturday night.

Mark Jankowski also scored for the Predators, who avoided a third consecutive loss overall and snapped a three-game home skid to the Rangers.

Nashville allowed five goals apiece in each of its last two contests but stifled New York on Saturday, killing all five of the visitors’ power-play chances, including a late four-minute opportunity.

Saros allowed 13 goals in his previous three starts but came up big when needed, especially during the third period when he stopped all eight shots from New York. The Rangers’ lone goal came from Filip Chytil in the second period.

New York has lost four of the last five contests and saw its season-high three-game road winning streak come to an end.

A seventh-round pick of the Predators in 2019, Parssinen was just called up from AHL Milwaukee, where he posted two goals and seven assists in 10 games this season.

At the 4:58 mark into the first period, Parssinen picked up the puck in his own end, skated down the near board, then streaked in and went high to beat New York netminder Jaroslav Halak for his milestone goal.

New York, meanwhile, outshot the Predators 11-4 but had nothing to show for it during the opening 20 minutes of the game.

The Predators made it 2-0 at the 8:37 mark into the second period, when Jankowski blew a Roman Josi pass by Halak (16 saves). New York, though, finally answered with 8:04 remaining in the middle frame as Chytil drilled a one-timer from the mid-slot off a behind-the-net pass from Adam Fox.

Nashville went 0-for-4 on its power-play chances on the evening, but that did not prevent it from a needed victory. The Predators have just six wins on the season and improved to 3-3-1 at home.