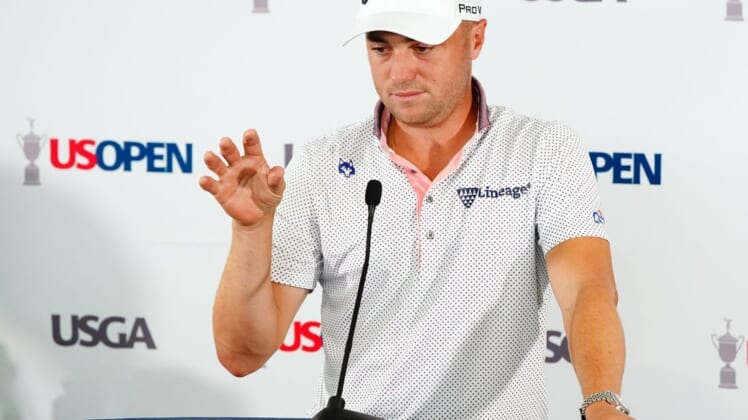 Speaking from The Country Club in Brookline, Mass. ahead of this week’s U.S. Open, Justin Thomas said Monday that the controversial LIV Golf Invitational Series had sucked up all the oxygen in the sport and overshadowed the third major of the season.

“It’s sad,” Thomas said. “This is the U.S. Open, and this is an unbelievable venue, a place with so much history, an unbelievable field, so many storylines, and yet (LIV) seems to be what all the questions are about. That’s unfortunate.”

Thomas, who won last month’s PGA Championship for the second major title of his career, said he “selfishly” did not want any of the PGA Tour’s best talent to leave for the budding rival series, which is headed by CEO Greg Norman and backed by Saudi financing.

But Bryson DeChambeau and Patrick Reed are the latest high-wattage names to confirm they would leave for LIV after the series debuted last week outside London with golfers like Dustin Johnson, Phil Mickelson, South Africans Louis Oosthuizen and Charl Schwartzel and Spaniard Sergio Garcia.

“All I can do is plead my case. But everybody out here is a grown-up. They can make their own decisions,” Thomas said.

LIV is offering players record purses, but many feel that Saudi Arabia is engaging in a “sportswashing” campaign to plaster over its checkered human rights record by funding the tour.

Thomas said he does not think less of his peers who go to LIV.

“You can disagree with the decision. You can maybe wish that they did something differently,” Thomas said. “But for people at home to say that Dustin Johnson is now a bad person, that’s not fair. … Do I wish he wouldn’t have done it, and am I a little sad about it? Yeah, but it is what it is. You’ve just got to move on and make the best out of what you’ve got.”

The tour has suspended 17 current and former members for playing LIV tournaments without its permission. Others who go will suffer the same punishment. Some, including Mickelson, have argued it should be up to individual golfers if they want to play on both tours.

Thomas was not in favor of letting them straddle the fence.

“I just want to play against the best in the world and I want a chance to try to win majors,” Thomas said. “With that being said, the best players in the world need to be here, but at the same time I don’t necessarily want guys to be able to do both.”

Thomas, coming off a third-place finish at last week’s RBC Canadian Open, will play Thursday’s and Friday’s rounds in a group with Tony Finau and Norway’s Viktor Hovland.