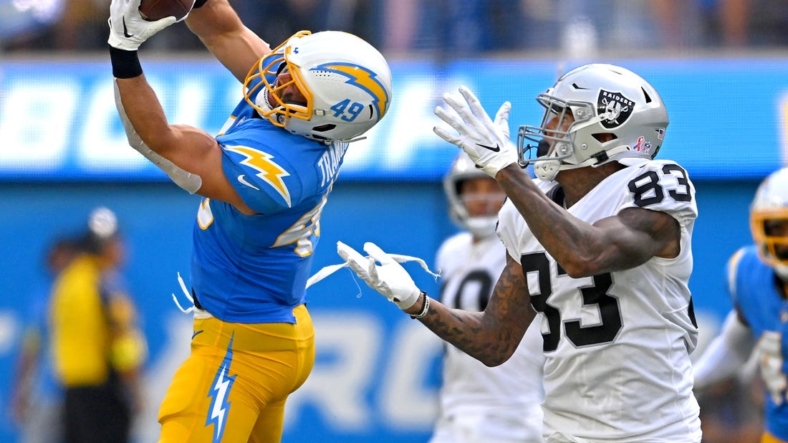 Justin Herbert threw for 279 yards and three touchdowns and the Los Angeles Chargers never trailed in their 24-19 victory over the visiting Las Vegas Raiders on Sunday.

Davante Adams, who the Raiders acquired from the Green Bay Packers in the offseason, had 10 receptions for 141 yards and a touchdown in his team debut, while Darren Waller added four receptions for 79 yards. Josh Jacobs rushed for 57 yards on 10 carries.

Trailing 17-3 at the half, the Raiders pulled to within 17-10 on Carr’s 18-yard scoring strike to Brandon Bolden less than three minutes into the third quarter.

The Chargers countered by going on an 11-play, 73-yard drive to extend the lead to 24-10 when Herbert tossed an 18-yard touchdown pass to Gerald Everett with 6:42 left in the third quarter.

The Raiders pulled to within 24-13 on Daniel Carlson’s 55-yard field goal with 1:03 left in the third quarter.

Carr’s 3-yard touchdown pass to Adams pulled the Raiders to 24-19 with 4:32 left, and Carr then threw incomplete to Hunter Renfrow on the two-point conversion attempt.

Las Vegas forced the Chargers to go three-and-out and got the ball back on their 21-yard line with 3:39 remaining. The Raiders drove to their 40-yard line but turned the ball over on downs when Carr was strip-sacked on fourth-and eight by Khalil Mack just after the two-minute warning.

The Chargers got one first down and ran out the clock.

After the teams exchanged field goals in the first quarter, Los Angeles found the end zone twice in the second quarter.

Herbert’s 1-yard touchdown pass to Zander Horvath gave the Chargers a 10-3 lead with 9:34 left in the half.

Los Angeles’ defense set up the Chargers’ next score.

Two plays after linebacker Drew Tranquill intercepted Carr’s pass and returned it to Las Vegas’ 31-yard line, Herbert threw a 23-yard scoring strike to Carter for a 17-3 lead with 35 seconds left in the second quarter.