JR Motorsports is working to find Noah Gragson's replacement and keeping four full-time teams. Plus, a big update on JR Motorsports and the NASCAR Cup Series. 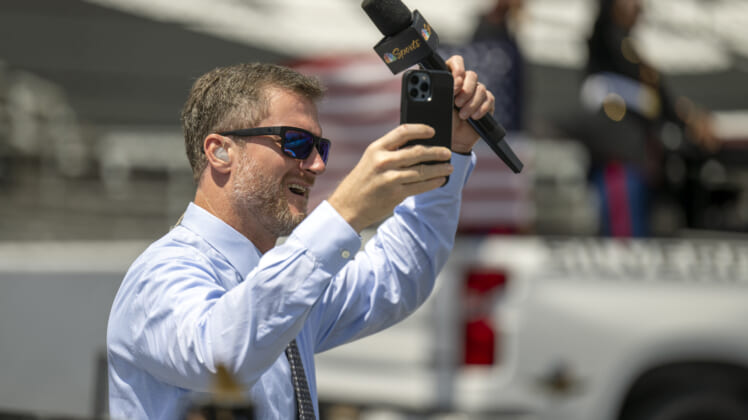 JR Motorsports has question marks surrounding its future as Noah Gragson leaves a vacant No. 9 car in the NASCAR Xfinity Series and talks about moving to the NASCAR Cup Series continue.

What is the latest on JR Motorsports’ potential plans moving forward?

JR Motorsports has a vacant seat to fill as Noah Gragson is set to join Petty GMS Motorsports on a full-time basis in the NASCAR Cup Series starting next season.

“We definitely want to continue four full-time teams in the Xfinity Series.”

It certainly appears that they will be a four-car operation as Earnhardt expressed her love for the Xfinity Series. The organization has run four cars for a while but just recently employed four full-time drivers.

Speaking of drivers, team co-owner Dale Earnhardt Jr. had this to say about the opportunities that are being presented to the organization for next season.

“We’re deep into some great opportunities to field that car next year. I can’t wait to be able to announce whatever that is, but from what I’m hearing, we’ve got some exciting prospects & programs that could potentially be in the No. 9 car next year.”

There is no word on whether JR Motorsports would have four full-time drivers, but Niece Motorsports driver Carson Hocevar has been linked to the No. 9 car at some capacity next year.

It sounds like Earnhardt is excited about the vacant seat’s future as the speculation continues. However, it is not the only speculation surrounding the NASCAR Hall-of-Famer’s organization.

Details about JR Motorsports’ potential jump to the Cup Series

JR Motorsports has been talked about when it comes to a potential move to the NASCAR Cup Series for a long time. In fact, Dale Earnhardt Jr. said he absolutely wants the organization in the Cup Series.

Even though Earnhardt wants them to enter NASCAR’s top level, it doesn’t sound like it’s going to be happening in 2023 at any capacity.

“(JR Motorsports) want(s) to, it’s just not working out so far…we’re not giving up for sure.”

It’s not from a lack of trying, but it’s hard to put something of this magnitude all together so it can work out from a business and financial perspective. There’s more behind the scenes that need to be done.

The organization also looked into running part-time in the NASCAR Cup Series, but Kelly Earnhardt Miller through some cold water on that hot topic.

“(JR Motorsports) even gave consideration to part-time racing and what they could look like if we didn’t have a charter. We’re just not there…we’ve had a lot of conversations.”

JR Motorsports will continue to look at what it will take to enter NASCAR’s top level, but it’s about putting the right pieces together.

Many people speculated about Noah Gragson, a future driver for Petty GMS Motorsports, possibly moving to the Cup Series with the organization and according to Earnhardt Miller, that was a real thing.

Earnhardt told Gragson that if JR Motorsports could acquire a charter for the Cup Series, she would love for him to be the driver of the vehicle. However, that never came to fruition, as seen by Gragson’s latest move.

As of now, JR Motorsports will continue to run four cars in the Xfinity Series while they work on a move to the Cup Series. The future is still bright for the organization in whatever they can accomplish.