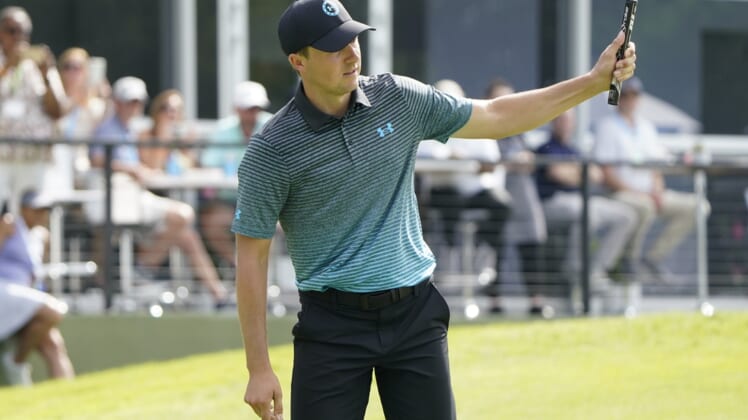 May 15, 2021; McKinney, Texas, USA; Jordan Spieth reacts on his eagle shot on the 18th green during the third round of the Byron Nelson golf tournament. Mandatory Credit: Jim Cowsert-USA TODAY Sports

Jordan Spieth is 0 for 4 in his bid to become the sixth member of the prestigious Grand Slam of golf club.

Spieth, 27, touched down in South Carolina this week to take another swing at the career slam, which comprises winning the British Open, Masters, U.S. Open and the as-yet elusive PGA Championship.

He finished in a tie for third in the 2021 Masters and rolls into the PGA Championship with more momentum than previous bids at the Slam.

Spieth suggested he’s not thinking about the Slam when he takes the first tee Thursday afternoon. He also said there was no true “turning point” in his mind when his golf game took off again.

But a pair of top 5 finishes at Phoenix and Pebble Beach seemed to set Spieth straight.

Since then, he won the Valero Open, competed at the Masters and tied for ninth at the Byron Nelson last week. 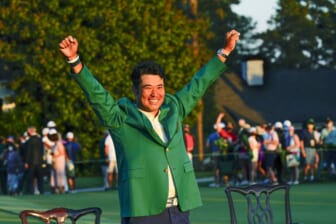 The Ocean Course at Kiawah Island Golf Resort looms as one of the more unique challenges and is the longest major in history at 7,876 yards. Spieth said Tuesday his focus is not on a score through 18 holes, but patience from one shot to the next.

“I think picking clubs off tees, picking lines off tees, are going to be important, but I would have liked to have seen the golf course a few times. It just wasn’t a possibility this year for me. Going to need to do a lot of good work the next two days,” Spieth said, repeating the expectation that wind will play a major role all four days of the PGA Championship.

“I think getting on to those greens in regulation is going to be very important this week, and inevitably windy conditions being on the water.”

“This week I think it’ll be more about hitting middle of greens and then taking advantage of par-fives.”

If Spieth accomplished that goal, he could well be in line to become the sixth golfer to claim the sport’s slam along with Tiger Woods, Ben Hogan, Gene Sarazen, Gary Player and Jack Nicklaus.

“Majors are what we’re trying to peak for,” said Spieth. “I feel like I’ll have a lot of chances at this tournament, and if I just focus on trying to take advantage of this golf course, play it the best I can and kind of stay in the same form tee to green I’ve been in, all I can ask for is a chance.”