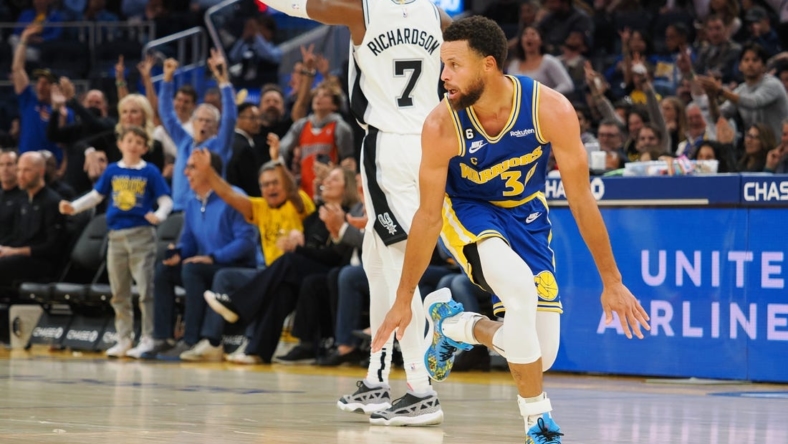 Jordan Poole poured in a season-high 36 points, 19 of them in a dominating first half, as the Golden State Warriors waltzed to a 132-95 win over the visiting San Antonio Spurs on Monday in San Francisco.

The game was the second of a road-home back-to-back for the Warriors, who lost in Sacramento on Sunday. Golden State has captured three of its past four games while the Spurs have dropped six of their past seven.

The Warriors led by 16 points at halftime and ran away from San Antonio in the third quarter, scoring the first 15 points of the period on the way to a 99-68 advantage.

The Spurs played without starting point guard Tre Jones, who had a stomach bug, while Golden State’s Klay Thompson missed the game to rest as has been the Warriors’ routine with him on the second night of back-to-backs this season.

The Warriors started the game with a bang, scoring 14 of the first 18 points before settling for a 33-26 lead after one period of play. San Antonio was never closer than four points the rest of the way. Curry scored seven points in the second period, including a ringing 3-pointer with 30.8 seconds remaining to help the Warriors assume a 61-45 advantage at the break.

In addition to Poole’s 19 points at the half Curry had 10. Golden State hit 11 3-pointers over the first 24 minutes, outscoring the Spurs 33-12 from beyond the arc.

Nine players scored for San Antonio in the first half, led by seven points from Bates-Diop, as the Spurs were held to their lowest scoring output for a first half this season.