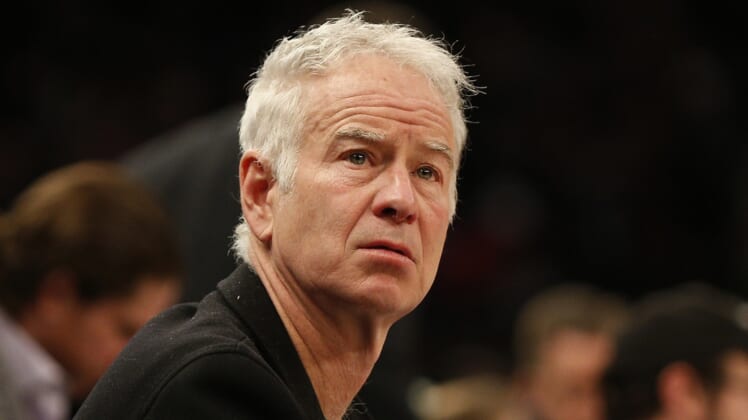 John McEnroe has come under fire for his comments following British teenager Emma Raducanu’s retirement from her fourth-round match at Wimbledon because of breathing difficulties.

McEnroe, a seven-time Grand Slam singles champion, speculated on the BBC’s broadcast that Raducanu was overwhelmed by the moment on Monday.

Raducanu, 18, stopped playing in the second set against Australian Ajla Tomljanovic and was visited by a trainer before departing the court for a medical timeout. The chair umpire later announced that the 338th-ranked Raducanu would not continue because of an undisclosed health issue.

“I feel bad for Emma, obviously,” McEnroe said. “It appears it just got a little bit too much, as is understandable, particularly with what we’ve been talking about this over the last six weeks with (Naomi) Osaka not even here.

“How much can players handle? It makes you look at the guys that have been around and the girls for so long — how well they can handle it. Hopefully she’ll learn from this experience.”

Osaka, a four-time major champion, pulled out of the French Open and missed Wimbledon because she said she required a mental health break.

The All England Club later said Raducanu had “difficulty breathing.”

“I can’t imagine being in her shoes, at 18, playing a fourth round in your home country. It’s something I can’t even imagine,” Tomljanovic said. “For him (McEnroe) to say that, it’s definitely harsh.”

McEnroe also works as an analyst for ESPN.

“We are exploring the details surrounding what was said on BBC and will be following up with John,” ESPN said in a statement.

Raducanu took to social media to update her followers on her condition.

“I wanted to let everyone know that I’m feeling much better this morning,” Raducanu wrote Tuesday on Twitter. “… At the end of the first set, after some super intense rallies, I started to breathe heavily and felt dizzy. The medical team advised me not to continue and although it felt like the hardest thing in the world not to be able to finish my Wimbledon on the court, I was not well enough to carry on.”

thank you for the support?? pic.twitter.com/C47TTvOQK9

Raducanu captured the local crowd throughout her run but was laboring badly and committed 25 unforced errors to go with six winners on Monday.

“We were very sad to see Emma forced to withdraw from her match last night and wish her all the best with her recovery,” The All England Club said in a statement. “She should be commended for the poise and maturity she has shown throughout the Wimbledon fortnight and we very much look forward to welcoming her back to Wimbledon next year and in the years to come.”