Last week, Don “Wink” Martindale tried to downplay how great Cincinnati Bengals quarterback Joe Burrow is, by saying there’s no need to get him fitted for a “gold jacket” yet. Burrow then shredded the Baltimore Ravens defense for 525 passing yards and four touchdowns. Basically, whatever the Ravens’ defensive coordinator’s approach was, it didn’t work.

This week, Steve Spagnuolo, the Kansas City Chiefs defensive coordinator is trying the opposite ahead of their matchup with Burrow and the Bengals on Sunday. Spags didn’t waste any time hyping up Burrow when given his chance to speak with the media. He even went as far as to say Burrow reminds him of a “young Tom Brady“. That’s high praise.

While Burrow does look advanced for a second-year pro, comparing him to a young TB12 is jumping the gun a bit. There’s no denying his talent, leading the Bengals from a two-win season to nine wins so far, putting his team at the very top of the AFC North division is impressive. But, somehow Brady won a Super Bowl in his first full season as a starting quarterback at just 24 years old. Burrow is in his second full season and already 25. 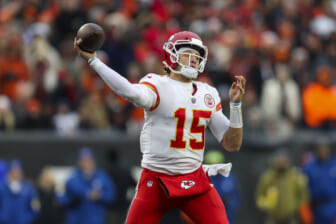 Does that mean Burrow can’t go on to have a historic career, and maybe even earn that gold jacket someday? Of course not. But the fact remains, although he has a chance to be quite good, Burrow is not a young Brady. No one is.

With that said, what Burrow is accomplishing with the Bengals, a team many said he should try to avoid at all costs, shouldn’t be discounted. In a division where most analysts picked the Cleveland Browns, Pittsburgh Steelers, or even Ravens, the Bengals are the ones who are in first place. Much of that credit belongs to Burrow.

Teams always try different tactics when getting prepared to face a new opponent. Maybe this is Kansas City’s attempt at getting inside Joe Burrow’s head by likening him to an all-time great. Whatever it is, both the Chiefs and the Bengals will look to improve their playoff seedings against one another.