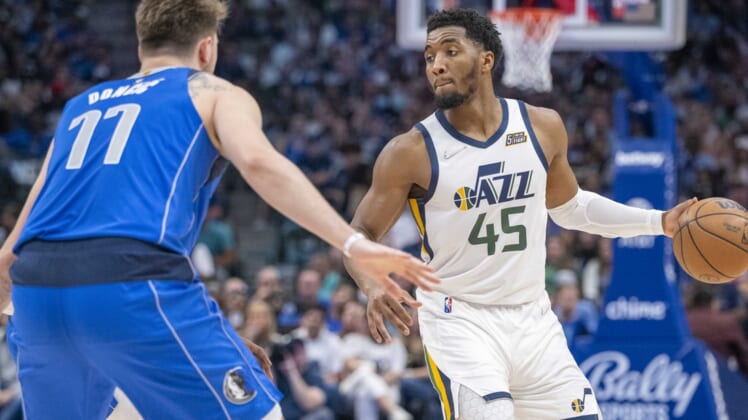 Though Luka Doncic returned to the practice court for a bit of shooting over the weekend, the Dallas Mavericks’ superstar is not expected to play in Game 2 of the first-round series with the Utah Jazz.

That has contributed to Utah shifting to a 5.5-point favorite after the Game 2 line opened at 4.5 points at BetMGM. The Jazz were being backed by 63 percent of the spread-line bets and 77 percent of the handle as of Monday afternoon.

The line was at 5.0 points at DraftKings, where Utah was drawing 54 and 64 percent of the action, respectively.

“Yesterday was another good day, and today he’s back on the court, so that’s a plus,” Dallas coach Jason Kidd said Sunday. “And we’ll see how he feels tomorrow.”

With Doncic in a cheerleader role on the bench, the Mavericks took an early lead but eventually fell behind by as many as a dozen points. To their credit, they stormed back in the fourth quarter, pulling within one and having the ball with a chance to go ahead in the final two minutes, before Utah made enough clutch plays to snag home-court advantage away.

Both teams took positives away from the way things played out in that fourth quarter, which really got interesting after Max Kleber drained a 3-pointer to make it a one-point game with 2:12 remaining.

“There were some moments when our mental toughness was challenged,” Jazz coach Quin Snyder admitted. “And we really responded.”

That hasn’t always been the case this season. Utah had a bad habit of watching double-digit leads devolve into defeats.

Kleber could have given the Mavs the lead back with a minute and a half remaining, but he missed a 3. Royce O’Neale, who attended nearby Baylor and hails from Killeen, Texas, then rebounded his own missed shot and followed that up by sinking a dagger beyond the arc for a four-point Jazz lead with 57.3 left.

Donovan Mitchell, who was MIA in the first half, sealed the win with four free throws in the final 16.2 seconds. He scored 30 of his 32 points in the second half.

Rudy Gobert only took one shot but spearheaded the Jazz defense with 17 rebounds and three blocked shots.

Utah likes that it was able to snag the series-opening win even though it doesn’t feel like it played its best and survived the comeback.

“I’m just happy to win the game,” Gobert said. “They had a lot of free throws at the end of the game, and we stayed focused and kept our heads and kept trusting each other.”

Added Mitchell: “We did our job, we got Game 1, now we gotta go out there and get Game 2. We’re not satisfied with this one.”

The Mavericks, on the other hand, got a bit of a confidence boost because they had a chance to win despite missing Doncic, being outrebounded by 19, 53-34, and only shooting 38.2 percent from the field and 9-for-32 from 3-point range.

Spencer Dinwiddie noted that free throws were a difference-maker. Utah hit 20 of 23, while Dallas only shot 26 of 34 from the charity stripe. He was 10 of 16 from the line and shot 6 of 15 overall.

“Personally, I’ve been thinking about the fact we lost by six and I missed six free throws, right?” Dinwiddie said. “So if anything, this should be encouraging for the fan base, in my opinion.

“Give them credit. They won the game. … But we had our chances to win it. And we just didn’t do it. Myself, first and foremost: It’s inexcusable in a playoff game to miss six free throws.”

Dallas also hopes to improve on the boards. The Mavericks were at a disadvantage, playing small against the Jazz and their 7-foot-1 star defender with a 7-foot-9 wing span.

“We have to do a better job as smalls to get back and help,” Kidd said. “That’s something that we knew was going to be an issue, especially playing small.”

The Over/Under market has been at 205.5 at both sportsbooks. The Over was being backed by 73 percent of the bets and 86 percent of the action at BetMGM, while DraftKings also reported one-sided action on the Over at 83 and 92 percent, respectively.