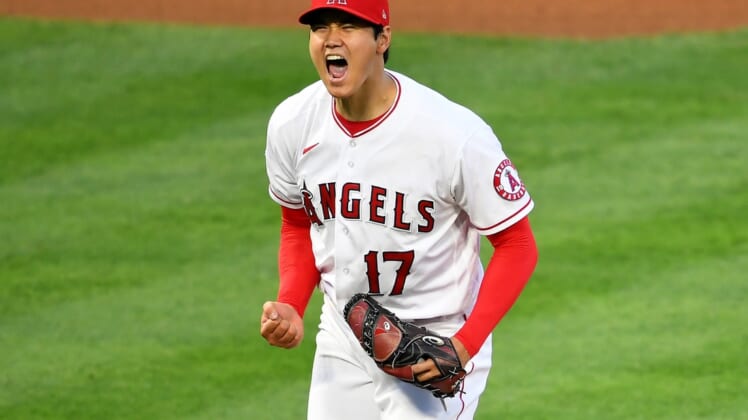 Apr 4, 2021; Anaheim, California, USA; Los Angeles Angels starting pitcher Shohei Ohtani (17) reacts after a strike out for the final out of the third inning of the game against the Chicago White Sox at Angel Stadium. Mandatory Credit: Jayne Kamin-Oncea-USA TODAY Sports

Shohei Ohtani homered at the plate and struck out seven on the mound in 4 2/3 innings, but it was Jared Walsh who stole the show in the Los Angeles Angels’ 7-4 victory over the Chicago White Sox on Sunday in Anaheim, Calif.

Walsh homered twice, including a three-run walk-off homer in the bottom of the ninth off White Sox reliever Matt Foster that gave Los Angeles three wins in the season-opening four-game series against the White Sox.

Walsh, who also hit a solo home run in the fifth inning, was a two-way player himself at the major league level, pitching in relief in five games in 2019, compiling a 1.80 ERA.

Ohtani became the first starting pitcher for the Angels to bat in the lineup of an AL game since 1973 — when the designated hitter rule went into effect — and he was sharp on the mound to begin the night. Through three innings, he allowed only two baserunners — a walk to Jose Abreu in the first inning and an infield single to Billy Hamilton in the third.

At the plate, Ohtani homered in the bottom of the first inning on the first pitch he saw from White Sox starter Dylan Cease, giving the Angels a 1-0 lead.

Ohtani took a 3-0 lead into the fifth inning but the White Sox tied the game thanks to one bizarre play.

Chicago had already scored one run and had runners on second and third with two outs and third baseman Yoan Moncada at the plate. Ohtani struck out Moncada with a splitter in the dirt with what should have been the third out, but the ball got away from catcher Max Stassi.

Stassi’s throw went over the head of the first baseman Walsh, allowing Moncada to reach and Adam Eaton to score from third. Second baseman David Fletcher backed up the play, but his throw home in an attempt to get Jose Abreu trying to score from second was high.

Ohtani, covering the plate, jumped into the air to catch the ball but Abreu’s slide undercut Ohtani and knocked him to the ground. Abreu scored to tie the game, and Ohtani, who made 92 pitches, was lifted from the game.

The Angels said Ohtani was not injured on the play, other than feeling “general soreness,” though it appeared he might have tweaked his left ankle. The club said he’ll be re-evaluated Monday.

The Angels snapped the 3-3 tie on Walsh’s homer in the fifth inning off White Sox reliever Codi Heuer, and took a 4-3 lead into the ninth inning. Chicago tied the game in the ninth on an unearned run, taking advantage of Angels closer Raisel Iglesias’ throwing error.