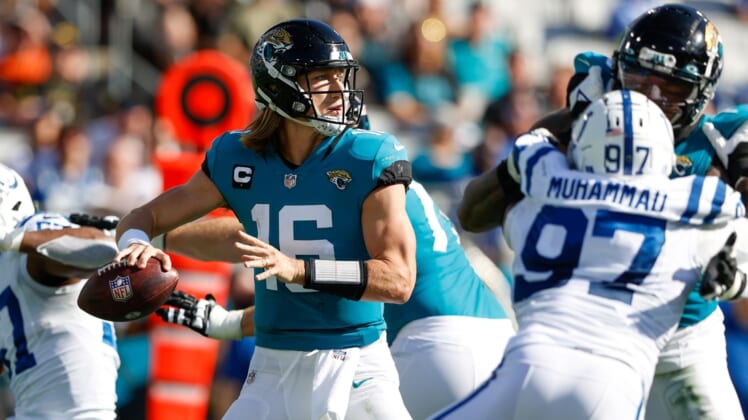 Trevor Lawrence capped a rocky rookie season with 223 yards passing and two touchdowns Sunday as the Jacksonville Jaguars earned a 26-11 upset victory over the visiting Indianapolis Colts, who missed out on a chance to clinch a playoff spot.

Lawrence completed 23 of 32 passes, including a 3-yard strike to a leaping Marvin Jones in the back right corner of the end zone with 3:08 left in the third quarter. Lawrence jumped to rescue a high snap and then avoided blitzing safety Khari Willis to make the game-breaking play.

Carson Wentz hit on 17 of 29 passes for 185 yards, including a 12-yard touchdown pass to Michael Pittman with 4:26 left in the game. But that was much too little, much too late for Indianapolis, which will need losses by the Pittsburgh Steelers and Las Vegas Raiders to qualify for the playoffs. Indianapolis would have advanced with a win or a tie.

NFL rushing leader Jonathan Taylor had 77 yards on 15 attempts but was stuffed for no gain on fourth-and-goal at the 1 early in the fourth quarter with the Colts trailing 23-3. He finished the regular season with 1,811 yards rushing.

Jacksonville put its stamp on the game immediately, driving 75 yards in 12 plays with its first possession of the game. Lawrence drilled a 2-yard touchdown pass to Laquon Treadwell at the 7:48 mark of the first quarter.

The Jaguars didn’t let Taylor get going in first half, limiting him to 18 yards. They also mounted a consistent pass rush that kept Wentz from finding a rhythm in the passing game. Indianapolis’ only points until late came on Michael Badgley’s 41-yard field goal with 9:08 left in the half.

Jacksonville made it 13-3 before halftime on 22- and 20-yard field goals from Matthew Wright, both after 11-play, 71-yard drives. The latter came one play after Laviska Shenault dropped a potential touchdown pass with two seconds left.