Unfortunately for New York Mets fans, Jacob deGrom’s shoulder tightness looks to be a serious injury, and the pitcher is expected to miss opening day and much more.

On Friday, ESPN MLB insider Jeff Passan broke the news that the tightness the three-time Cy Young Award winner was feeling on Thursday is a stress reaction in his right scapula that will sideline him for a ‘significant amount’ of time.

Jacob deGrom will miss next four weeks at the very least

The tightness in the four-time All-Stars shoulder occurred while throwing long-toss in preparation for his latest spring training start on Friday. The practice session was immediately shut down and he was sent in for testing.

Soon after Passan’s tweet, the team’s official Twitter account offered up specifics on deGrom’s recovery timetable. Revealing he would be out for at least the next month.

“The immediate prescription is for Jake to discontinue throwing for up to 4 weeks and then reimage the area. At that time, we’ll update the plan of care,” the Mets said in a tweet.

Despite being viewed as a reliable and durable player for most of his outstanding career, deGrom has had issues with injuries over the last two seasons. After making 30 or more starts for three straight years, the ace pitcher started in just 12 games in the abbreviated 2020 season, and 15 in 2021. An elbow injury ended his season early two years ago, and he missed much of last year with a right forearm issue. 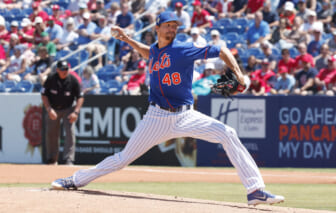 DeGrom was set to be the team’s opening day starter when their 2022 schedule kicked off against the Washington National on April 7. Now, big-ticket free-agent addition Max Scherzer will slot into that spot and become the new ace of the team in deGrom’s absence.

With their star pitcher sidelined for half of the 2021 season, the Mets finished with a 77-85 record and were third in the National League East.