Jabari Walker leads Colorado to upset win over No. 2 Arizona 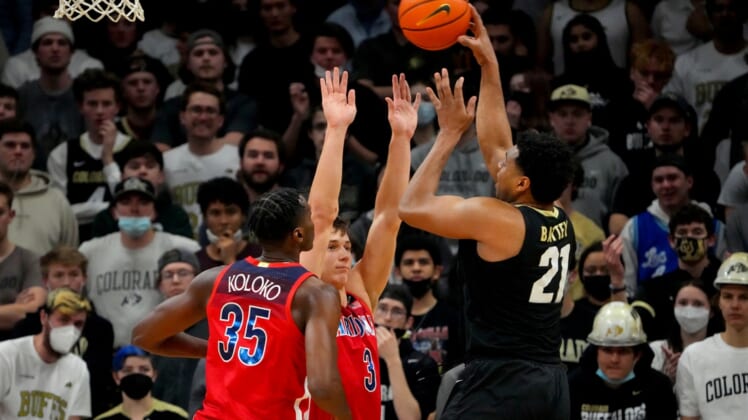 Jabari Walker had 15 points and 14 rebounds, Tristan da Silva scored 19, and the Colorado Buffaloes upset second-ranked Arizona 79-63 in Boulder, Colo., on Saturday night, denying the Wildcats a chance to clinch a share of the Pac-12 Conference title

The Buffaloes made 10 of their first 13 shots out of halftime to erase a five-point Arizona lead.

Down 42-38, Battey made a 3-pointer, da Silva hit consecutive layups, and after a Wildcats dunk, Simpson scored seven points and Barthelemy hit a layup to spark a 9-2 run that put Colorado ahead 54-46 with 13:33 left.

Arizona got within four but then Colorado stretched the lead to 61-50. The Wildcats followed with three empty possessions and da Silva gave the Buffaloes a 13-point lead with 7:03 left.

Tubelis converted a three-point play to end a 4:25 scoring drought and started a 7-0 run by Arizona but Barthelemy’s three-point play increased Colorado’s lead to 66-57 with 5:14 remaining.

It was 68-59 when Tubelis missed the front end of a one-and-one, Battey missed at the other end but Mathurin was called for an offensive foul on a drive. Battey was fouled on the other end and made two foul shots to put the Buffaloes ahead 70-59.

The Wildcats turned it over and Walker hit a layup with 2:44 left, and Colorado closed it out.

The Buffaloes missed their first 11 shots of the game and didn’t make their first field goal until Barthelemy’s layup more than six minutes in but they only trailed 8-4.

Colorado then made seven of its next eight shots to take a 16-11 lead midway through the first half. Arizona responded with a 13-4 run to go back in front and led 37-32 at intermission.