Is Jets HC Adam Gase on the hot seat this season? 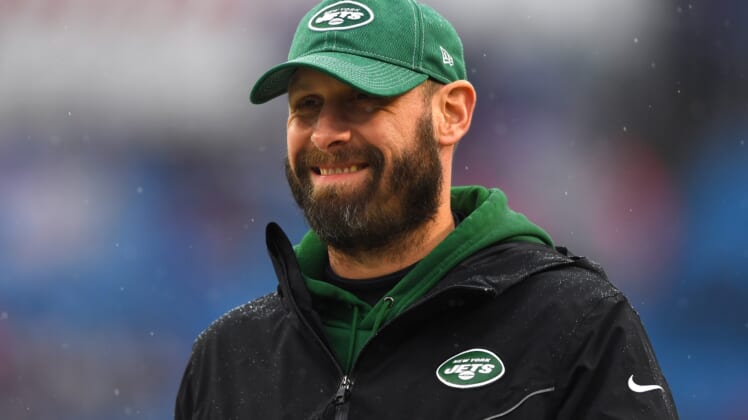 Just a few weeks after the Miami Dolphins fired Adam Gase coming off two disappointing seasons, the New York Jets scooped him up hoping he could turn the franchise around in 2019. Coming off a year that saw the team struggle for much of the year, could Gase already be on the hot seat before the 2020 season?

Will the Jets fire Adam Gase after the 2020 season?

The 2019 season started poorly for the Jets and even worse for Sam Darnold. He missed three games with mono and didn’t play up to his abilities early upon his return. Between the franchise quarterback seeing ghosts in the pocket and the team’s 1-7 start, it looked like Gase would only last a year in New York.

Fortunately, New York took flight in the second half of the season. The Jets won six games over the final stretch, finishing with a 7-9 record. However, Gase’s squad benefited from close wins against some of the NFL’s worst teams. They beat the Miami Dolphins, the Pittsburgh Steelers without Ben Roethlisberger and a Buffalo Bills squad that rested its starters. In their final three wins, the Jets never cracked 23 points and combined for a 14-point margin of victory.

Gase managed to save his job and still held some solid footing in New York, but that won’t be the case if history repeats itself in 2020.

According to Pro Football Network’s Tony Pauline, Gase will likely stick around past the upcoming season if the offense shows improvement and the team finishes 8-8. New York hired Gase for his offensive mind, but the team was often carried by its defense this past season. Simply put, that needs to change and this offense must show real signs of growth.

The Jets added some talent in the offseason, but the front office didn’t exactly provide Gase with a ton of talent. If this is going to be a .500 team next season, Gase will need to get even more out of his players.

Does Adam Gase have support from his players?

Near the end of the 2019 season, rumors swirled that Gase lost respect from the locker room. It created further concern in New York regarding his ability to be a head coach and left many questioning if the organization should move on.

Things aren’t as bad in the locker room as initially thought. While there is no mutiny on the horizon, per Pauline, there is also no player in the locker room willing to fall on the proverbial sword for Gase. While he might not be the most beloved coach in the building, Gase has some support.

Star running back Le’Veon Bell threw support behind his head coach and Darnold still firmly believes in the coach helping him develop. As long as a vocal star and the face of the franchise are happy, Gase will have a shot at redemption in 2020.

The 42-year-old will be coaching with his job on the line this upcoming season and it might be his last shot to be a head coach. If he can deliver and this team takes a step forward, the Jets can take flight and become relevant in the NFL once again.