The Tampa Bay Rays are the kings of grinding out wins. With a sputtering offense and injuries piling up, though, are they already out of the World Series chase?

The Tampa Bay Rays can do damage. They’re the savvy, modern-day MLB ball club that manufactures wins. With that said, the beginning stages of the 2021 season have brought to life what happens when the Rays’ strength isn’t firing on all cylinders: they can’t contend for the World Series.

It’s early, and a 20-19 record is salvageable. The issue for the Rays is why they’re off to this tedious start. Losing and/or trading Blake Snell and Charlie Morton this offseason was never going to help their cause, but the Rays have developed young arms on a frequent basis over the last decade.

Injuries have blown up their pitching staff this season (Nick Anderson, Chris Archer, Diego Castillo, Michael Wacha, Chris Mazza, Chaz Roe, Oliver Drake, Colin Poche, Yonny Chirinos and Jalen Beeks have all suffered injuries over the last four months), and those who are healthy aren’t pitching at an otherworldly level.

Tampa Bay Rays staff is holding down the fort, but offense is lacking

Tyler Glasnow has been manager Kevin Cash’s ace, blowing his fastball past hitters and pitching deep into games. Josh Fleming has fared well as both a starter and reliever. Shane McClanahan has been efficient across three starts. Meanwhile, the bullpen has impressively held its own.

On the other hand, Rich Hill, Michael Wacha and Brent Honeywell have struggled mightily. Here’s the thing, though: while this pitching staff hasn’t been top-shelf per se, they’re a sturdy unit doing enough to give an MLB offense a chance to win.

On the whole, the Rays pitching staff entered Thursday with a 3.68 ERA and holding opponents to a .230 batting average. That’s incredible considering who they’ve been playing without. Why has it yielded a .500 start?

The offense has been tiresome.

Austin Meadows, Brandon Lowe and Willy Adames are all hitting no better than .208. Yandy Diaz, a proven power hitter, hasn’t hit a home run in 120 at-bats this season.

The Rays’ bats are putting their pitching staff in a situation where they have to be essentially invincible every game. 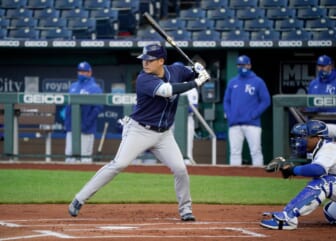 Tampa Bay Rays are taking their unique model to extremes

The Rays have been an operation reliant on its pitching staff over the last three seasons, which is perfectly fine; there are plenty of teams with deep pitching staffs that get to the playoffs with mere respectable lineups. Plus, the Rays won 90-plus games in 2018 and 2019 and won the American League pennant last season.

Let’s consider the way the Rays won Game 5 of their AL Division Series matchup with the New York Yankees and four games against the Houston Astros in last season’s AL Championship Series. The scores of those five wins were as follows: 2-1, 2-1, 4-2, 5-2 and 4-2. Tampa Bay eked out these victories thanks to dominant pitching and some timely hitting, specifically from Arozarena.

The Rays are taking their model to extremes this season, and that means relying on their pitching staff to the point of sustainability. Truth be told, the Rays have a capable and fundamentally sound positional depth chart. Unfortunately for the Tampa Bay faithful, the offense comes in spurts.

Arozarena looks nothing like the October demon the baseball world witnessed last season. Meadows hasn’t been a potent force since 2019. Lowe has been streaky. Adames hasn’t built on his encouraging 2020 campaign.

This statistic puts the struggle precisely in perspective: Joey Wendle leads everyday Rays players with a .277 batting average. Francisco Mejia has been a threat from both sides of the dish, yet has done so splitting time with Mike Zunino behind the plate. 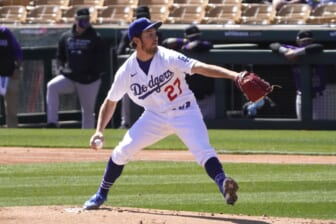 Tampa Bay has the talent to contend even with Snell and Morton in the rearview. All they need is a grouping of position players with continuity to be middle-of-the-pack at the plate from a production standpoint. To date, they have been far from it.

There are few, if any other teams in MLB who can move on from their two best starting pitchers, have over half of their new pitching staff suffer injuries and still be a top-10 pitching rotation. Frankly, it’s unheard of.

To win the World Series or merely advance past the Wild Card Round, the Rays need their starting pitching to be elite, like it has been in each of the last two seasons. Remarkably, what they’ve done under the circumstances this season isn’t enough because their offense isn’t hacking it.

The Tampa Bay Rays will miss the playoffs if the product they’ve put forth thus far doesn’t significantly change. This is what happens when a team relies on perfection from a particular aspect of its roster.