How has Alex Bowman turned into a future NASCAR star?

Alex Bowman's path in NASCAR has been unconventional. Here is how Bowman has gone from an unknown driver to Jimmie Johnson's replacement. 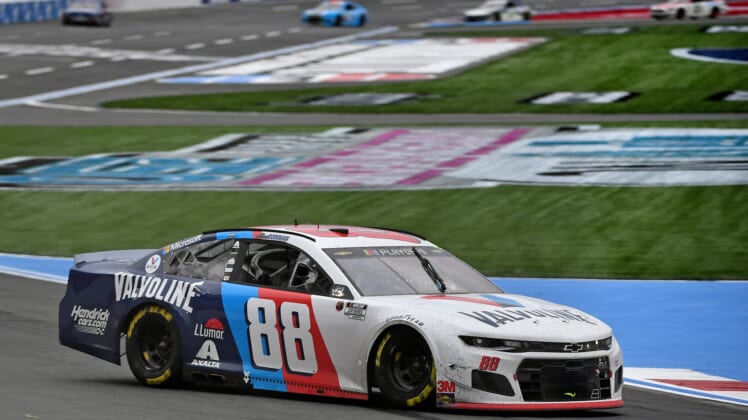 Earlier in October, it was announced that current Hendrick Motorsports driver Alex Bowman would move to the famous No. 48 for the 2021 season. Bowman will replace seven-time NASCAR champion Jimmie Johnson as he retires from full-time racing this season.

Bowman is not new to replacing decorated stars in NASCAR. After Dale Earnhardt Jr. retired from full-time racing at the conclusion of the 2017 season, the Arizona native was pegged to drive the No. 88 car for Hendrick Motorsports.

How has Bowman gone from a relatively unknown driver to one of the faces at Hendrick Motorsports?

Bowman started racing quarter midgets in the United States Auto Club (USAC) in 2000 when he was only seven years old. He primarily raced in Arizona and California. For the next six years, he accumulated nine national championships and 165 feature wins.

“Alex showed an incredible amount of natural ability in a pavement midget. His speed and consistency were impossible to ignore, and with his résumé coming into this, I’m confident that he will race well for us this year,” team owner Marc DeBeaumont said.

Bowman ended his rookie season by winning the 2009 USAC National Midget Rookie of the Year award. However, in early 2010, Bowman suffered a nasty wreck that resulted in a concussion, two broken collarbones, broken ribs on his whole right side and punctured/collapsed lungs.

After suffering a terrifying accident at the start of 2010, Alex Bowman made the move to stock car racing at 17 years old. Bowman ran two races in the Rev-Oil Pro Cup Series, now known as the CARS Solid Rock Carriers Tour. He had two top-10 finishes in three total races.

In 2011, Bowman was a part of the original NASCAR Next class along with Matt DiBenedetto, Bubba Wallace, Daniel Suarez, Corey LaJoie, and Brett Moffitt. He then moved to X Team Racing in 2011 for a full-time K&N Pro East Series season. Bowman finished sixth in standings while taking home the Rookie of the Year with four top-5’s and seven top-10’s in 12 races.

After a successful year at X Team Racing, Bowman moved to Cunningham Motorsports as a Team Penske development driver in the ARCA Racing Series. He took home four wins, 11 top-5’s, and 13 top-10’s in the 19 race season. Bowman also was awarded his third Rookie of the Year award.

That same year, he started his first NASCAR Nationwide Series race at Chicagoland Speedway. Driving for Turner Motorsports, he finished 17th in his first start. Another great season for Bowman led to a promotion in one of NASCAR’s top levels of racing.

Alex Bowman signed with Robby Benton Racing to race full-time in the NASCAR Nationwide Series at the start of the 2013 season. Throughout his career, Bowman had been accustomed to success and winning races. However, this was the start of a newfound territory for the then 20-year-old driver.

Bowman did not have much success during the season. He accounted for two top-5’s and six top-10’s in his only full-time NASCAR Nationwide Series season. He was released before the season-ending race at Homestead-Miami Speedway, finishing 11th in the standings.

After being released from the team, Bowman was left without a ride for the 2014 season. However, he did find a full-time NASCAR Cup Series ride with BK Racing after testing for the team before the Daytona 500 during Preseason Thunder. Bowman was assigned to race full-time for the team in the No. 23 Toyota Camry. He finished a season-best 13th at Daytona International Speedway and finished 35th in the standings.

Bowman moved to Tommy Baldwin Racing for the 2015 season in the NASCAR Cup Series. It was a rough start for the second-year driver after he missed the Daytona 500 due to a wreck. Bowman would race the rest of the season with a best finish of 16th at Talladega Superspeedway.

Unfortunately, Tommy Baldwin Racing announced that Bowman would not return to the team for the 2016 season. This left him without a full-time ride for the season.

Without a full-time ride, Bowman got a chance at Hendrick Motorsports

Sometimes, blessings come in the form of the disappoint. While it was certainly hard for Bowman to not return to Tommy Baldwin Racing, he was given an opportunity in 2016 that would effectively change his racing career. He ran nine races for JR Motorsports in the NASCAR Xfinity Series with three top-5’s and seven top-10 finishes.

Bowman certainly was impressive for JR Motorsports, which helped make his case when Dale Earnhardt Jr. was sidelined with a concussion. For the rest of the season, Bowman and NASCAR legend Jeff Gordon split duties driving the No. 88 car for Hendrick Motorsports. The Arizona native had three top-10’s in 10 races and competed for the win at Phoenix Raceway near the end of the season.

After the season, Bowman took a gamble and did not sign with another team. He stayed with Hendrick Motorsports as their simulator and test driver for the 2017 season. He also returned to the NASCAR Xfinity Series for two races with Chip Ganassi Racing and won his first race in NASCAR’s top three levels at Charlotte Motor Speedway.

With Dale Earnhardt Jr. possibly on the way out, it was smart for Bowman to wait for a full-time ride.

Luck was finally on Bowman’s side when it was announced on July 20th, 2017, that he would replace Dale Earnhardt Jr. in the No. 88 on a full-time basis for the 2018 season. After being released from Tommy Baldwin Racing and out of a full-time ride for a year, the most unlikely underdog story finally came to fruition.

Bowman would run the season with Greg Ives as his crew chief, with Nationwide and Axalta as his primary sponsors. He would run well in his first full-time season with Hendrick Motorsports. Bowman had three top-5’s and eleven top-10’s while finishing 16th in the standings. However, it wasn’t long until he got to taste what it was like to win at the NASCAR Cup Series level.

On June 30th, 2019, Bowman held off Kyle Larson to win his first NASCAR Cup Series race at Chicagoland Speedway. He locked himself into the playoffs and showed he was capable of winning in good equipment. He would go on to have one win, seven top-5’s, and 12 top-10’s in his second season.

Bowman again won another race earlier this year at Auto Club Speedway. Before the COVID-19 pandemic, Bowman was in his contract year. However, he was re-signed on a one year deal through the 2021 season. The only issue with Bowman was his sponsorship, as Chevy Goods was a placeholder for the No. 88 car. Without sponsorship, it would be difficult to envision him staying at Hendrick Motorsports.

That was solved on October 6th this year, when it was announced that Alex Bowman would take over another NASCAR legend’s car. Bowman will move over to the No. 48 car, replacing Jimmie Johnson, with a full 36-race sponsor in Ally Financial next season.

What does the future hold for Alex Bowman?

Alex Bowman currently is in the Round of 8, as the first race of the round is this weekend at Kansas Speedway. He is 18 points below fellow teammate Chase Elliott on the cut-line. If Bowman can win a race at either Kansas, Texas, or Martinsville, he will clinch his spot into the Championship 4. Even if he’s unable to advance, next year and beyond is very important.

This is the first time that Bowman will have a full 36-race sponsor for Hendrick Motorsports. Ally Financial will be on the car every race and the No. 48 will be on the side. He has replaced a legend before, but replacing Jimmie Johnson is a much harder task than Dale Earnhardt Jr. Bowman’s contract currently goes through the 2021 season, while Ally Financial’s goes through the 2023 season.

While it might be unlikely, the possibility that Hendrick Motorsports lets Bowman go is not out of the realm of possibility. He still has to earn another contract like he has his whole career. Now that he’s been given every single resource he needs to win and compete for championships, it’s important that he takes this opportunity and runs with it.

Most likely, Bowman will run well and compete for wins on a weekly basis. He’ll earn another contract, maybe even a long-term deal. However, nothing is guaranteed in NASCAR and the fight to compete has to be there every week.

It has been an up and down journey for Alex Bowman. He went from a promising Team Penske development driver to someone looking for an opportunity to drive a race car. Bowman has shown flashes in his short time with Hendrick Motorsports. He has two wins in three years, with the possibility to run at Phoenix Raceway for the championship in 2020.

Ironically, Phoenix Raceway is where everything really started for Bowman. He almost beat the best NASCAR drivers in the world when he was a substitute driver for Dale Earnhardt Jr. Maybe, this will all come full circle for the 27-year-old driver and he could be etched as a NASCAR Cup Series champion for the rest of his life.

However the next four weeks go, Bowman has set himself up in the best opportunity anyone could have asked for. It’s up to him to write his story and if anyone questions whether he’s up for the challenge, just look at his resume. It will do the talking for him.