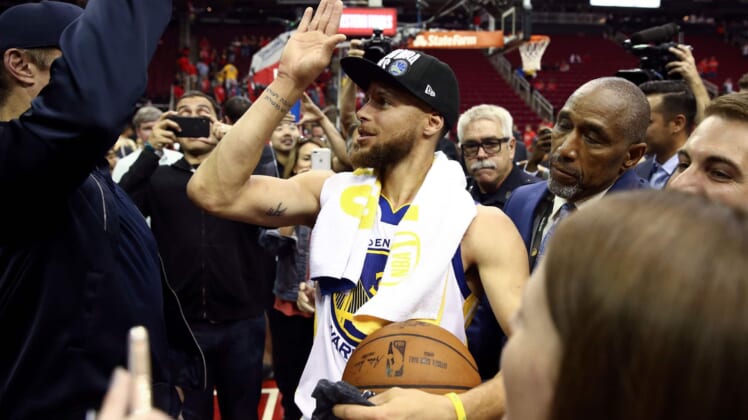 Stephen Curry is synonymous with great shooting and the Golden State Warriors. Together, they have been incredibly successful, even as the Warriors star begins to age.

The big picture: As Curry continues to advance past his athletic prime, this is how he could win another MVP award with the Warriors in the future.

The Warriors’ most valuable player

Regardless of what you think of Curry as a player, there is no doubt he is the Warriors’ most valuable player. He may not be as defensively versatile as Draymond Green or have the size of Klay Thompson, but Curry is the engine that pushes Golden State. His gravity opens up opportunities for other players.

That’s why he won back-to-back MVPs in 2015 and 2016, leading the Warriors to their first championship in 40 years and helping them win the most regular-season games with 73, respectively.

In those two years, Curry:

Although the Warriors didn’t win back-to-back championships, those two years cemented Curry as the best player in Warriors history and one of the best NBA history. His leadership and ability to impact the game in so many ways is what makes the Warriors such a difficult team to play when healthy.

Curry’s chances of winning another MVP

For the 32-year-old Curry, another MVP is not out of the question. But, it won’t be easy. Since 1956, only four players have won MVPs at age 32 or older: Steve Nash, Kareem Abdul-Jabbar, Karl Malone and Michael Jordan. Both Malone and Jordan won the award twice after age 32 in the mid-to-late 90s.

After calculating the each of the aforementioned players stats during their MVP-winning seasons, Curry’s numbers would have to look something like this:

All things considered, those numbers are attainable for Curry, especially under head coach Steve Kerr. He can average 24 points, about seven assists and four rebounds with a steal and half a block in about 33 minutes, at the very least. As long as the Warriors win at least 70% of their games and in the upper echelon of teams, he’s in good shape.

Because of the shortened 2019-20 season, Curry can use this longer-than-usual offseason to fully recover and prepare for the 2020-21 season. With next season potentially being shortened, 2020-21 is his best chance to win another MVP.

That said, it’s going to be very difficult for him as James Harden, Giannis Antetokounmpo and LeBron James are also vying for that trophy. As he gets older, that task becomes infinitely more difficult as other players begin to get better.

However, if Curry can average anywhere close to his MVP-winning seasons and help the Warriors win about three-fourths of their games and reach the playoffs or even the NBA Finals, he’s a lock for the MVP again in 2021.