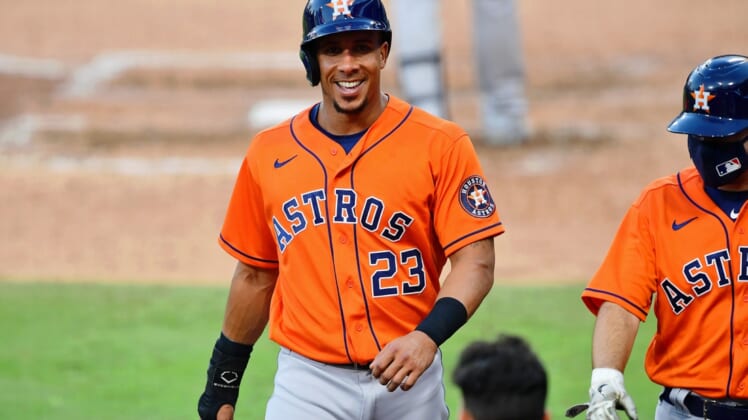 Terms of the deal were not disclosed, but Brantley will reportedly earn $32 million over the course of the deal, according to numerous reports.

“There were a lot of mixed emotions, obviously, in a small timeframe,” Brantley said. “But I got a lot of great texts and I’m excited to be back, and a lot of my teammates reached out to me and they’re excited that I’m coming back. So it means the world to me.”

Brantley said he was negotiating with the Blue Jays but they never agreed to terms.

“We were close,” he said. “Obviously we were in talks and there was interest on both sides, but… everything worked for where I wanted to be.”

He was even better in the playoffs — hitting .346 (18 of 52) in 13 games with three homers and 11 RBI with a .981 OPS, as he was a major reason the team came within a win of advancing to the World Series, losing the American League Championship Series to the Rays in seven games.

“Having the run the last two years that we did and having the player relationships that I did, I really wanted to come back here and to kind of finish this thing off,” Brantley said. “We have … unfinished business.”

Overall, Brantley has appeared in the postseason five times in his career, hitting .286 in his 38 postseason games with four home runs and 16 RBI.

Brantley’s .309 combined batting average since 2018 is tops among all American League players.

Since 2014, his .311 combined average ranks second among all Major League players to his teammate, Jose Altuve (.321). In that span, Brantley has also posted an .852 OPS. He has also been one of the most difficult hitters to strikeout with a 9.92 plate appearances-per-strikeout ratio since 2014, which is third-best in the majors.

Prior to signing with Houston as a free agent in 2019, Brantley had spent his entire Major League career (2009-18) with the Cleveland Indians.