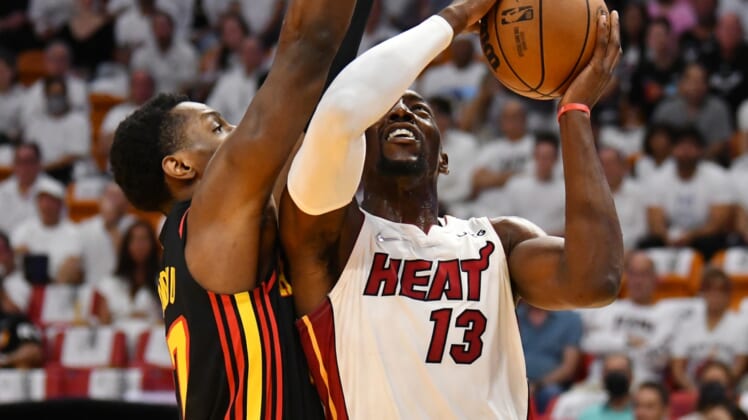 Duncan Robinson poured in 27 points off the bench and Jimmy Butler tallied 21 points as the Miami Heat opened the Eastern Conference’s first-round playoff series against the visiting Atlanta Hawks with a 115-91 romp Sunday afternoon.

Game 2 is set for Tuesday night in the same building.

The Heat held Hawks scoring leader Trae Young to eight points, though he didn’t play in the fourth quarter. He shot 1-for-13 from the field, missed all seven of his 3-point attempts and committed six turnovers.

Danilo Gallinari’s 17 points paced Atlanta. De’Andre Hunter had 14 points for the Hawks, while John Collins and Kevin Knox II each added 10 points. Atlanta benefited from 23-for-27 shooting on free throws.

Miami was playing for the first time in a week, while the Hawks had a home romp past Charlotte Wednesday and a comeback at Cleveland Friday during the play-in tournament to secure the No. 8 seed in the conference.

Kyle Lowry supplied 10 points and nine assists for Miami, which was charted for only four offensive rebounds. That came largely because the Heat shot 52.4 percent from the field compared to Atlanta’s 38.7 percent.

Miami was clearly better in what became a first-half shooting contest, draining 10 of 19 attempts from 3-point range. The Hawks were 2-for-18 on 3s before the break.

Robinson was the only Heat player in double figures through the first half with 11 points. Gallinari had 14 points for Atlanta, but Young was held to eight points, with 1-for-9 shooting on 3s.

Miami’s last four field goals of the first half came on 3-pointers, with Gabe Vincent connecting on two of those.