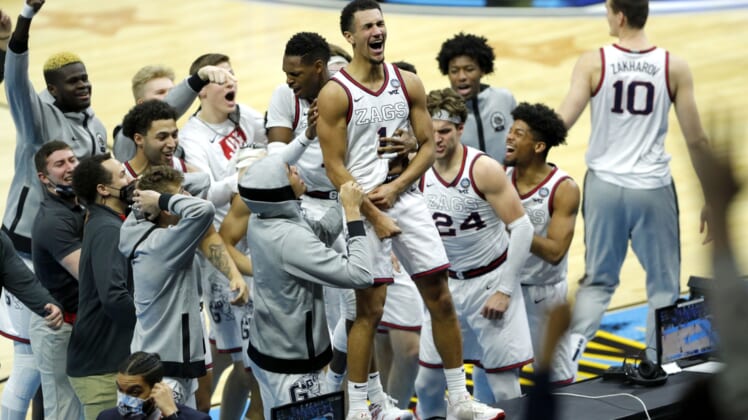 Gonzaga Bulldogs guard Jalen Suggs (1) leaps on a sideline table to celebrate after sinking a buzzer beater three-pointer to defeat UCLA in overtime during the semifinals of the Final Four of the 2021 NCAA Tournament on Saturday, April 3, 2021, at Lucas Oil Stadium in Indianapolis, Ind. Mandatory Credit: Robert Scheer/IndyStar via USA TODAY Sports

Top-ranked Gonzaga’s dramatic escape against 11th-seeded UCLA has set the stage for a highly anticipated final showdown against Baylor.

And bettors are divided on whether the Bulldogs can complete their mission of becoming the first unbeaten national champion in 45 years.

The divided betting action speaks to quality of the matchup.

After having an early regular-season matchup canceled due to COVID-19 concerns, Gonzaga and Baylor are finally set to play in what many believe is a showdown between the two best teams throughout the season.

The Bulldogs (31-0) are aiming to become the first unbeaten national champions since Indiana in 1976, while the Bears (27-2) are looking to claim their first national crown.

Baylor coach Scott Drew recalls when the Dec. 5 contest — also in Indianapolis — was scrapped that there was a feeling it wouldn’t be the last the two squads saw of each other. Gonzaga coach Mark Few had similar sentiments.

“Coach Few and I joked when the game got canceled and we went to the arena and we did a press conference saying that the game was canceled and whatnot,” Drew said. “And as we were riding back we were, like, ‘You know what, if we end playing this game in the Final Four or the championship game, that sounds like a better idea.’

“So that was obviously the goal for both of us.”

Baylor had the easier Final Four contest on Saturday as it built a 25-point halftime lead while whipping second-seeded Houston 78-59. Gonzaga was pushed to the hilt by UCLA and prevailed 93-90 in overtime on Jalen Suggs’ fabulous 35-foot heave as time expired.

Suggs’ shot gave the Bulldogs their 35th straight victory, and the freshman is looking forward to a fierce fight with the Bears.

“Baylor’s a great team,” Suggs said. “They’ve got great guard play. They play really hard, have great defense, bigs who give it their all, and play above the rim. So it’s going to be a dogfight, I think. There’s no other way to put it.

Gonzaga was considered the best team in the land for nearly the entire season with Baylor just slightly behind.

But once the Bears fell from the ranks of the unbeaten in late February, the gap seemed to widen.

Yet in the eyes of Baylor star Jared Butler, this showdown is an even-matched contest.

The Bears won their first five NCAA Tournament games by an average of 15.2 points. The last three wins have come against No. 5 seed Villanova, No. 3 Arkansas and Houston.

Butler scored 17 points against the Cougars on Saturday and Davion Mitchell contributed 12 points and 11 assists.

Baylor is playing in the NCAA title game for the first time since falling 58-42 to Kentucky in 1948.

Gonzaga also has played in the championship game just once, falling 71-65 to North Carolina in 2017.

The Bulldogs have been planning to play in Monday’s game since practice sessions ramped up in the fall.

Gonzaga won its five tournament games by an average of 19.8 points. The highest seed it has faced was No. 5 Creighton in the Sweet 16.

Drew Timme notched 25 points on 11-of-15 shooting in the win over UCLA that kept the Bulldogs from being recalled as a one-loss, close call.

But Few isn’t really up for chatting about what any milestones right now.

“What goes through my mind is we’ve got a short duration here to get ready for just — gosh, just a terrific Baylor team,” Few said. “I think now they’re back playing the way they were earlier this year. And so well-coached and just executing the plan.

“But unfortunately, no time for (enjoying the season) right now. We’ve got to get ready for a terrific Baylor team and we’re going to have to play great.”

The last team to enter the national title game with an unblemished record didn’t fare so well. That is when Larry Bird-led Indiana State lost to Magic Johnson’s Michigan State team in 1979.

Gonzaga has won all five previous meetings with Baylor, including an 83-71 win in the second round of the 2019 NCAA Tournament.