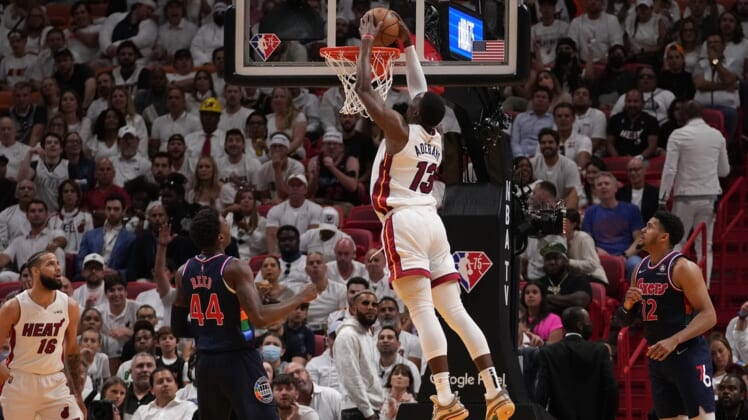 Seven players scored in double figures for the Heat on Tuesday night as Miami blasted the visiting Philadelphia 76ers 120-85 to grab a 3-2 lead in a best-of-seven Eastern Conference semifinal series.

Jimmy Butler scored a game-high 23 points for the Heat, but unlike losses in Games 3 and 4 when he was their only consistent source of offense, he had plenty of help.

Butler added nine rebounds and six assists while hitting 9 of 15 field-goal attempts. Strus was 7 of 13 from the floor, including 4 of 10 from 3-point range.

Joel Embiid scored 17 points to pace Philadelphia, while James Harden added 14 and Tobias Harris netted 12 points. However, the 76ers made just 36.5 percent of their field-goal attempts and were outrebounded 46-36.

Game 6 is Thursday night in Philadelphia, where the 76ers try to stave off elimination. The road team hasn’t won yet in the series.

Miami set an immediate tone, rattling off 12 straight points for a 21-10 lead at the 5:16 mark of the first quarter. Strus drained consecutive 3-pointers to cap the run.

The Heat stretched the margin to 18 in the second quarter before settling for a 56-44 halftime lead. Butler had 14 first-half points to lead all scorers.

Miami pushed the advantage to 20 less than four minutes into the third quarter on Vincent’s three-point play.

The cushion maxed out at 37 points late in the game.