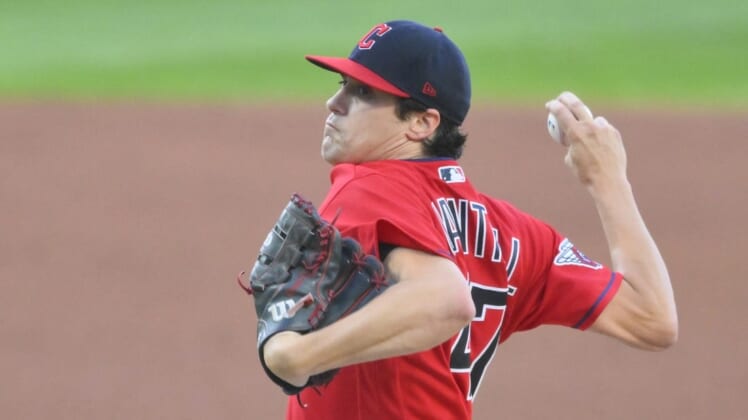 Trades seldom can be fully analyzed at the time they are made.

On Tuesday, Clevinger, who had a second round of Tommy John surgery shortly after joining the Padres, gave up two solo homers — the only two hits he allowed in six innings — and took a 3-1 loss against his former team.

Two players the Guardians received in that trade — Naylor and Hedges — started against Clevinger on Tuesday, and Miller pinch-hit late in the game.

Guardians manager Terry Francona is glad to have Quantrill on his side.

“Mike Clevinger did a great job in Cleveland,” Francona said of the right-hander who was 42-22 with a 3.20 ERA over five seasons with his former club. “But we got a lot of key players from that trade.”

He will be facing the Padres for the second time this season. Back on May 4 in the second game of a doubleheader, Quantrill gave up three runs on three hits and five walks with seven strikeouts in six innings in a game the Guardians eventually won 6-5 in 10 innings.

The Guardians are 14-9 when the 27-year-old right-hander starts this season. Two starts ago, Quantrill held the Toronto Blue Jays to one hit and no walks while striking out seven over seven scoreless innings. He wasn’t as good on Aug. 17, when he yielded four runs on five hits and two walks in a six-inning no-decision against the Detroit Tigers.

Snell was also on a run until his last start, when he gave up three runs on seven hits over seven innings on Friday in a no-decision against the Washington Nationals. The 29-year-old left-hander started that game despite being involved in a non-injury traffic accident the previous night.

“I’m just happy I’m alive and was able to pitch,” he said after his car, which was pulled over, was hit by an alleged drunk driver. “I know I could’ve been a lot better (against the Nationals), but with everything that happened, yeah, I’ll get better in my next one.”

Yu Darvish was to have started for the Padres on Wednesday, but he went on paternity leave Tuesday and won’t rejoin the team until the weekend in Kansas City. He could be one of two key players missing for the Padres.

Right fielder Juan Soto was a late scratch from the series opener due to mid-back tightness, and he likely won’t play Wednesday with Thursday being an off day.

“My guess is we’ll be without Soto,” Padres manager Bob Melvin said.