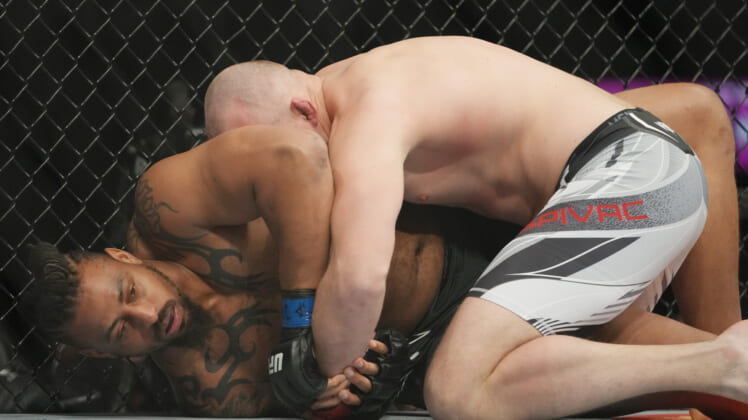 One time NFL Pro-Bowler turned MMA fighter Greg Hardy returned to action at UFC 272 on Saturday evening, and his night did not last very long.

Since 2018, the former Carolina Panthers linebacker has been a professional cage fighter. After winning five of his first six — two of those inside the fabled Octagon — he looked to be a sound heavyweight prospect with world-class athleticism and serious upside.

However, he was victorious only twice in his next six fights and entered the T-Mobile Arena, in Las Vegas, hoping to avoid the first three-fight losing streak of his young career. Unfortunately for him, he was unable to achieve the goal and put a halt to his losing skid.

After just over two minutes into the first round of the fight, opponent Serghei Spivac was able to secure a second takedown on the 266-pound Hardy (7-5). With the mat game being the weakest area of his attack, the NFL veteran had difficulty escaping the grasp of “The Polar Bear.”

Eventually, the native of Moldova was able to start to work away on Hardy with punishing ground and pound and force the referee to mercifully stop the action at 2:16 of the opening frame. Handing Spivac a TKO win to open the pay-per-view portion of UFC 272.

The victory was a bounce-back victory for Spivac (14-3) after a TKO loss to UFC London headliner Tom Aspinall in September.