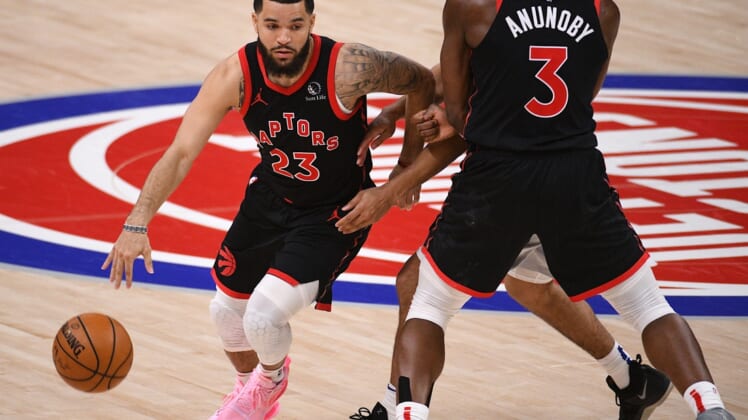 Stephen Curry is back and filling up the scoresheet again.

But the Golden State Warriors still need to find more consistency on offense and protect the basketball better.

Golden State, which has lost five of its past six, will look to achieve this when it continues its three-game East Coast trip on Friday night against the spiraling Toronto Raptors in Tampa, Fla.

Curry scored a game-high 36 points and posted 11 rebounds against the Miami Heat on Thursday in his second game back since returning from a bruised tailbone.

“Maybe, at times, we got rushed,” Andrew Wiggins said. “Couple bad decisions, that’s what it came down to.”

Wiggins finished with 23 points, eight rebounds and four assists, but was held to only five points in the second half.

“This game was never really out of reach,” Golden State coach Steve Kerr said. “But we never had control of it because our habits and our decision-making were not good.”

“It’s hard to put your finger on what exactly it is because there’s a million and one things going wrong out there, but we’ve got to figure it out somehow,” Fred VanVleet said.

Recently-acquired Gary Trent Jr. scored a career-high 31 points in the Thunder loss, while OG Anunoby finished with 20 points and 11 rebounds.

VanVleet also filled up the stat sheet in historic fashion, finishing with 18 points, seven assists, four rebounds, five steals and four blocks. He joined Tracy McGrady, Doug Christie and Oliver Miller as the only Raptors to have four or more in each of those categories in a game.

But the Raptors were crushed on the boards 64-35 overall and 19-7 on the offensive glass by the short-handed Thunder, who were without three regular starters, including Shai Gilgeous-Alexander.

Toronto played without Kyle Lowry, who sat out for the second time in the past three games with a right foot infection. Lowry is expected to miss a week-to-10 days.

Rodney Hood suffered a right hip strain in the first half of Wednesday’s loss and is out for Friday’s game. Jalen Harris (right hip), Patrick McCaw (left knee) and Paul Watson (health and safety protocols) are also out.

“We’ve got to show up for work tomorrow and try to get another one Friday,” VanVleet said. “I don’t think we’re at the point where we’re pointing fingers or guys are blaming. I think we passed that point a long time ago. So we’re pretty cohesive and together. We’re just not playing well.”

For Golden State, Jordan Poole and Kevon Looney each left the game against Miami in the fourth quarter with what appeared to be ankle injuries. Warriors forward Eric Paschall missed his second consecutive game with a sore left wrist.