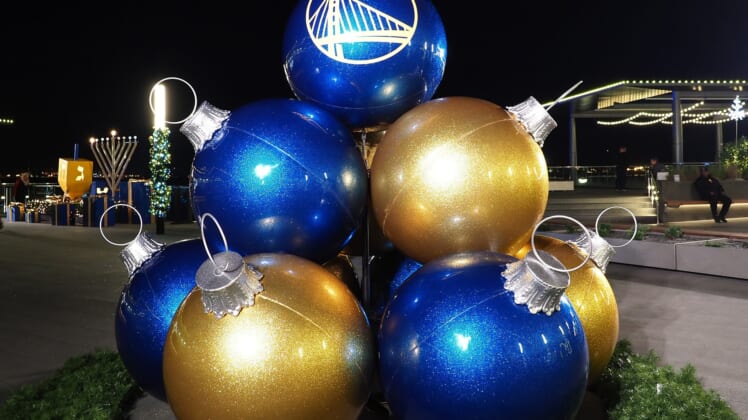 It’s official the five-time defending Western Conference champion Golden State Warriors will not be heading to the NBA Finals for a sixth consecutive time. They are not one of the teams slated to return to the 2019-20 season at Walt Disney World in Orlando late next month.

Golden State finishes the campaign having posted a league-worst 15-50 record. It was a disastrous first season in San Francisco. Klay Thompson missed the entire season due to the torn ACL he suffered in last year’s NBA Finals.

Stephen Curry played in just a handful of games due to an injury himself. Draymond Green was a shell of his former self. What could go wrong did go wrong for the Warriors.

According to this report from the San Francisco Chronicle’s Connor Letourneau, the Warriors’ plans for this offseason will not be impacted by the global COVID-19 pandemic and the economic downturn it has caused.

“Golden State is unlikely to let a drop in the cap change how it approaches roster-building,” the report read. “(Joe) Lacob realizes that with Stephen Curry, Klay Thompson and Draymond Green all in their early 30s, the Warriors might only have a three- or four-year window to win another title. Even if it requires a massive luxury-tax burden, Golden State will do what it can to capitalize on the rest of its core players’ prime years. Anything else would go against what this ownership group has come to represent.”

This is somewhat surprising in that the 2020-21 NBA cap is expected to be lowered or remain flat due to the lack of league-wide revenue stemming from the truncated season and the fact that fans will not be in attendance when it resumes.

Golden State finished the 2019-20 season north of $22 million over the cap and well into the luxury tax. It has been above the tax throughout the team’s recently-ended dynasty.

Golden State has a ton of money committed to its top-four players, especially after the team flipped D’Angelo Russell for Andrew Wiggins back in February. Here’s a look at their top cap hits for the 2020-21 season.

That’s a whole lot of cash devoted to just four players. Normally, this would limit the Warriors to veteran minimum players and those on rookie deals. That’s not going to be the case in 2020-21. Here’s why.

Golden State’s decision to trade this former NBA Finals MVP last summer netted the team a trade exception worth north of $17 million. It can acquire a salary either below that amount or $100,000 more than it.

This opens up the possibility of bringing in another semi-star to team up with the big four. It also creates a ton of options for general manager Bob Myers. Though, that additional $17 million would cost Golden State’s owners a good $30 million in cold hard cash. Despite this, the team is expected to use it.

Firmly in the luxury tax, Golden State has the ability to sign a player in free agency at the mid-level exception. It’s expected to be near $6 million for the 2020-21 season. While that won’t net the Warriors a starter-caliber player, it would strengthen a short bench. Based on this report, the expectation is that the Warriors will use this exception.

I previously focused on the possibility that Golden State could trade Draymond Green. The team has received interest in his services and could potentially net a lottery pick back in return.

The Warriors could combine Green’s salary with the above-mentioned trade exception and draft picks to net another star. Remember, they have the highly valuable Minnesota Timberwolves unprotected 2021 first-round pick stemming from the D’Angelo Russell-Andrew Wiggins trade.

Despite a disastrous 2019-20 season, the Warriors are in a good position to contend moving forward. Thompson and Curry are set to return from injury. Andrew Wiggins is an intriguing figure.

The expectation now is that the Warriors’ brass will give Bob Myers whatever he needs from a financial perspective to bring Golden State back from the dead.