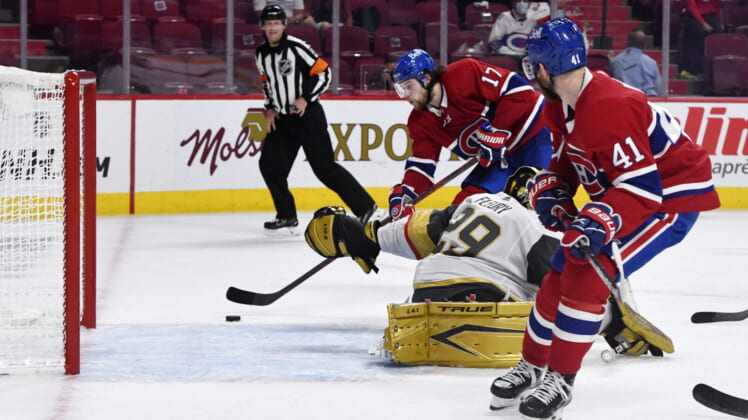 With two minutes to go, the Vegas Golden Knights had a 2-1 lead were well on their way to a Game 3 victory. Alex Pietrangelo had broken a third period tie with a shot on the rush that beat Carey Price cleanly, giving the Golden Knights a late lead in this crucial game. Everything changed when Marc-Andre Fleury bobbled the puck and Josh Anderson tied the game, forcing overtime in the final moments of the game.

In overtime, the Canadiens converted a 2-on-0 when Anderson received a cross-crease pass that he fired into the back of the net. It was a big performance for Anderson who has been in a slump recently and has struggled offensively during these playoffs after a strong regular season.

Fleury’s mistake would have not been as costly if it weren’t for the lack of goal-scoring by the Golden Knights.

For the Golden Knights, this game represents a massive missed opportunity. Instead of being up in this series they now find themselves down 2-1 losing their second-straight semifinal game. They will need to win Game 4 on the road else they will be heading back to Vegas for Game 5 where they will be on the brink of elimination.

While Fleury has been exceptional for the majority of these playoffs, this is his second mistake that has directly lead to a goal against. The first came in the previous series when he let a weak shot from Brandon Saad beat him with under a second to go in the period. While these moments can be discounted as fluky mistakes, the repeated nature and the fact that this one came at a critical time is very bad news. With Robin Lehner patiently waiting as the backup, it remains to be seen how Peter DeBoer will approach the rest of the series.

Fleury’s mistake would have not been as costly if it weren’t for the lack of goal-scoring by the Golden Knights. The Canadiens have done the best job of any team thus far at slowing down the Golden Knights as they have a hot goalie and players that are responsible in their own zone. Moving forwards, responsibility has to fall on the forwards to finish some of their numerous chances. Price being on a hot streak can only be an excuse for so long.

One of the biggest storylines throughout this series thus far has been the goals from the Golden Knights defensemen. Through the first two games, they scored 5-of-6 of the Golden Knights goals and it was Pietrangelo who came through again tonight with a huge goal in the third period that looked like it might stand as the game-winner until the Canadiens tied the game late.

There’s a positive and a negative side to this issue for the Golden Knights. The positive is the fact that they are getting scoring from the blue line. This makes them tougher to stop and gives their offense a wrinkle that not many teams across the NHL can match. However, the much larger negative is that their forwards aren’t scoring, an issue that has been glossed over at points because the Canadiens have struggled to score themselves.

The forwards, especially the top line of Mark Stone, Alex Tuch, and Max Pacioretty, were quiet once again tonight. They had chances and generated shots, but shots don’t win games at the end of the day. They have still failed to score, and the absence of Chandler Stephenson may be hurting more than many realize.

The key for the Golden Knights will be to get both the forwards and defensemen going together, much as they were for the majority of the previous series against the Colorado Avalanche. While it’s too early to look ahead, the Tampa Bay Lightning looms on the other side of the bracket. To beat a high-octane team like that, the Golden Knights will need scoring from everywhere.

In a game as low scoring as this one, any mistakes made by the opposition must be exploited for goals. The Canadiens made the first costly mistake when Eric Stall threw a puck in front of his own net, committing a hockey cardinal sin.

Nic Roy jumped all over the puck and roofed it to open the scoring. While that goal was very important, the more costly mistake was made by Marc-Andre Fleury late in the third period. With a one goal lead and the clock heading towards zero, Fleury mishandled a puck, and it ended up in the back of his own net.

The Golden Knights were doing a great job of keeping the Canadiens from generating anything offensively, seemingly headed for a solid victory. The mistake sent the game to overtime, where Josh Anderson would eventually end the game. It was a costly mistake that dearly cost the Golden Knights a game in a critical playoff series.

“It was an unfortunate bounce, there’s nothing you can do about it,” said captain Mark Stone after the game. “Fleury has been great all year. It was one mistake and we needed to bail him out, and we didn’t.”

Name a more iconic duo than the Vegas Golden Knights and playing hot goalies in the playoffs. Game 3 was yet another instance of the Golden Knights controlling play, dominating the shot count, and generally being the better team but not seeing results on the scoreboard because of their opponent’s goalie. It happened last season against the Vancouver Canucks and Dallas Stars, and it happened earlier in these playoffs with the Minnesota Wild.