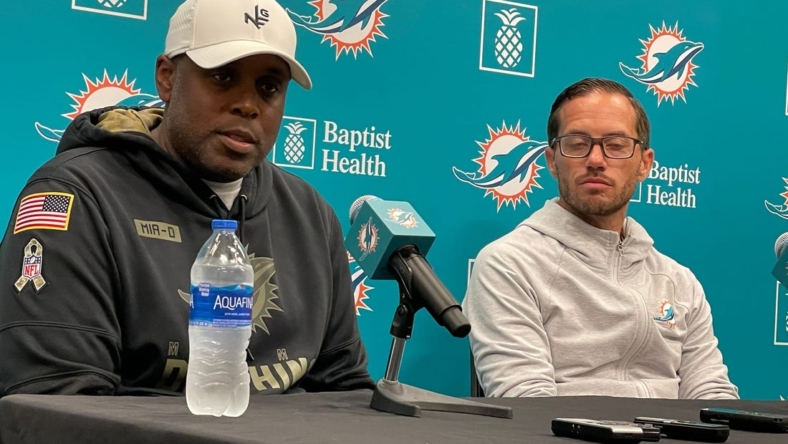 Dolphins general manager Chris Grier chuckled at the media suggestion Miami might be a seller approaching the NFL trade deadline on Tuesday.

He was still laughing Wednesday when he met the media to discuss the deals that landed outside linebacker Bradley Chubb from the Denver Broncos and running back Jeff Wilson from the San Francisco 49ers.

“We won’t be satisfied until we win a Super Bowl,” Grier said Wednesday. “We have good players. We have a good scheme. I’m not into predictions but we have a good team with a good chance to win.”

Grier said he pulled the trigger to trade a 2023 first-round pick, a 2024 fourth-round pick and running back Chase Edmonds to the Broncos for Chubb after researching the recovery of pass rushers who’ve had torn ACLs. Chubb, 26, is two years removed from the injury and led the Broncos with 5.5 sacks. The Dolphins are already well down the road with Chubb on a long-term contract.

“We anticipate having something finished up here shortly,” he said.

The deals capitalized on the multiple picks received from the 49ers in 2020 to move up from No. 6 to No. 3 for quarterback Trey Lance. Since making those deals, Grier and the Dolphins used San Francisco’s original ammunition to draft wide receiver Jaylen Waddle, acquire wide receiver Tyreek Hill from the Kansas City Chiefs and finally on Tuesday, land Chubb from Denver.

“”Oh, this is where I found old dealer Chris! I thought you’d be in Vegas dealing!” a jovial Mike McDaniel said Wednesday, storming Grier’s press conference for the start of the coach’s media session. “Did you talk about how well the team is coached?”

Grier and McDaniel pointed to one common reason the Dolphins were able to make the Chubb deal: the play of quarterback Tua Tagovailoa.

Tagovailoa leads the NFL in passer rating (112.7) and yards per attempt (9.02) with Hill leading the NFL in receiving yards (961). Despite a scary head injury and previous durability questions, McDaniel said he and Grier are firmly on the side of the fence that Tagovailoa is the right quarterback for their team.

It eased any worry about parting with 2023 first-round draft picks.

“I fully see Tua as the quarterback for this team and this franchise,” McDaniel said. “He’s a great talent. Since I’ve been here I’ve kind of known.”