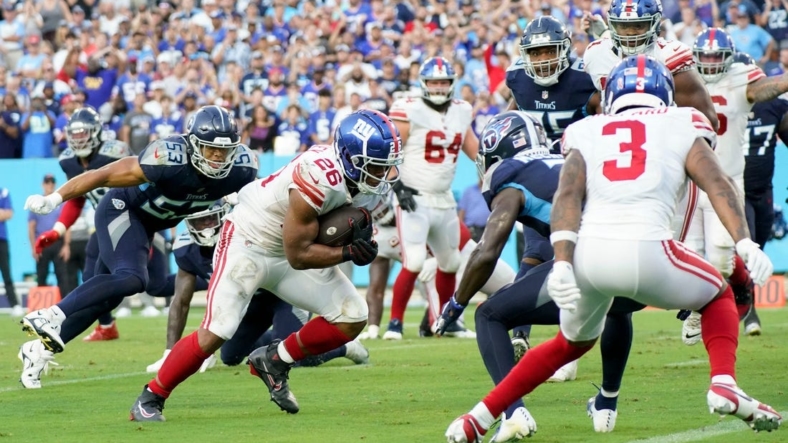 The New York Giants rallied from a 13-point hole and took a risk by going for a two-point conversion for the winning points in a 21-20 escape over the host Tennessee Titans to open the season Sunday in Nashville.

This came after Daniel Jones fired a conversion pass to running back Saquon Barkley. The Giants did all their scoring in the second half in the head-coaching debut for Brian Daboll.

Jones went 17-for-21 for 188 yards with two touchdowns and an interception. Barkley ran for 164 yards and a touchdown on 18 carries.

The Giants took possession at their own 27 with 5:27 remaining. They capitalized on a fourth-and-1 conversion on the first play after the two-minute warning. Jones threw 1 yard to fullback Chris Myarick for the touchdown and then connected with Barkley for the two-point conversion with 1:06 left.

The Titans scored on their first possession of the season, needing to go only 45 yards for a touchdown after Kyle Philips’ 46-yard punt return. Tannehill connected with Hilliard for a 7-yard play for the points.

Bullock made field goals from 46 and 23 yards in the second quarter.

After forcing a punt to begin the second half, the Giants went 90 yards in four plays, scoring on Barkley’s 4-yard run. The extra-point attempt was botched.

The next time New York had the ball, it took just two plays to strike again. Jones connected with Sterling Shepard for a 65-yard touchdown and the score was tied 13-13.

Tannehill’s 23-yard touchdown to Hilliard broke that tie with 3 minutes left in the third quarter.

The teams swapped turnovers in a potential game-changing stretch early in the fourth quarter. Tennessee’s Philips muffed a punt, giving the Giants possession at the Titans’ 11.

The Giants had 131 yards of total offense in the first half. They punted four times and lost a possession on a fumble.