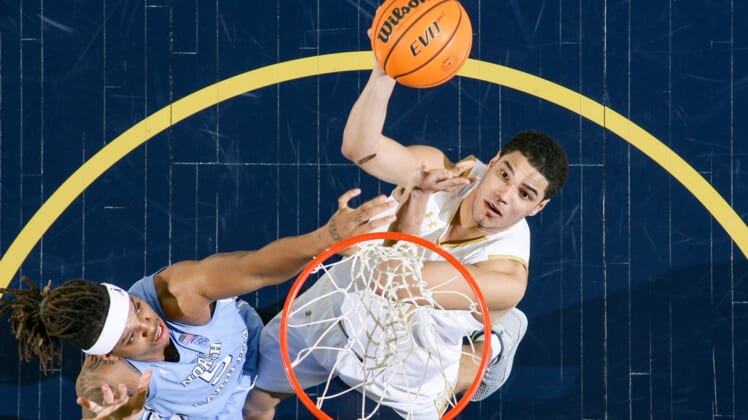 Saturday night in Atlanta will be a battle of one team trending in the right direction against an opponent in desperate need of a win.

Notre Dame (8-5, 2-1) has won consecutive Atlantic Coast Conference games against Pitt and North Carolina, while Georgia Tech (6-7, 0-3) is still trying to get in the win column in conference play.

A winner of four straight games overall, Notre Dame will be coming off one of its best wins of the season, a 78-73 home victory over North Carolina. The Irish only played seven players, but four of them reached double figures in scoring. Nate Laszewski led the team with 20 points and eight rebounds, followed by Blake Wesley and Dane Goodwin with 18 and 17 points respectively.

The Tar Heels made a late charge to erase a Notre Dame lead that got as high as 13, but the Irish hit six free throws in the final minute to ice the game.

“I’m proud of our group,” Notre Dame head coach Mike Brey said. “Because like the Pittsburgh game last week, we had game pressure on us and were able to make some big shots and get some big stops.”

Georgia Tech, on the other hand, had a tall task with a road game against No. 2 Duke Tuesday and lost 69-57 against the Blue Devils. Michael Devoe scored 21 points, but as a team the Yellow Jackets shot just 21 of 64 (32.8 percent) from the floor and saw two players foul out in a game they never really had a chance to win down the stretch.

“Duke is very, very good,” Georgia Tech head coach Josh Pastner said about the opponent. “They’re good enough to win the national championship; they’re as good as any team in the country.”

The Yellow Jackets have now lost six of seven following a 5-1 start to their season.

This will be the first of two meetings between the teams this season, with Notre Dame set to host the return game on Feb. 26. The teams only met once last season, and Georgia Tech won it in dramatic fashion by overcoming a 17-point deficit to win 82-80.