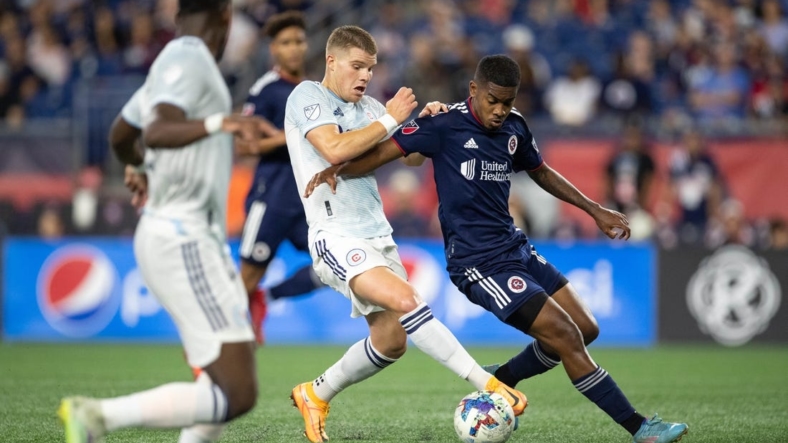 Gaga Slonina recorded his 11th shutout of the season to help the Chicago Fire play to a 0-0 draw with the New England Revolution on Wednesday night at Foxborough, Mass.

The 18-year-old Slonina made five saves as Chicago ended a three-match losing streak. The Fire (8-13-7, 31 points) were outscored 8-1 during their slide.

Djordje Petrovic made two stops for New England (8-9-11, 35 points), which has just one goal over its past three matches. The Revolution are winless over their past four matches (0-2-2), but are tied for the eighth-most points in the Eastern Conference with FC Cincinnati.

New England had a big chance in the 85th minute as Damian Rivera unleashed a left-footed blast. Slonina got a hand on the shot, and it caromed off the right goal post.

The Revolution are unbeaten in their past seven matchups (3-0-4) with the Fire.

New England had a 14-10 edge in shots and placed five on target. The Fire put two on goal. Chicago is in 13th place in the East.

The Fire had an early opportunity after New England’s Henry Kessler was called for a hand ball to give Chicago a penalty kick.

Chris Mueller lined up the ball at the spot in the 22nd minute but his right-footed shot was kicked up the middle and easily stopped by Petrovic.

New England’s Tommy McNamara put a ball in the net in the 25th minute but the goal was waved off. Video review determined the ball had gone out of bounds on the left sideline prior to the Revolution’s charge up field.

Slonina made saves in the 55th and 56th minutes to keep the game scoreless.

Gustavo Bou came up empty on his header to start the sequence. A minute later, Carles Gil fed McNamara and his point-blank header was deflected over the net by Slonina.

In the 60th minute, Chicago’s Jhon Duran had his left-footer saved by Petrovic.