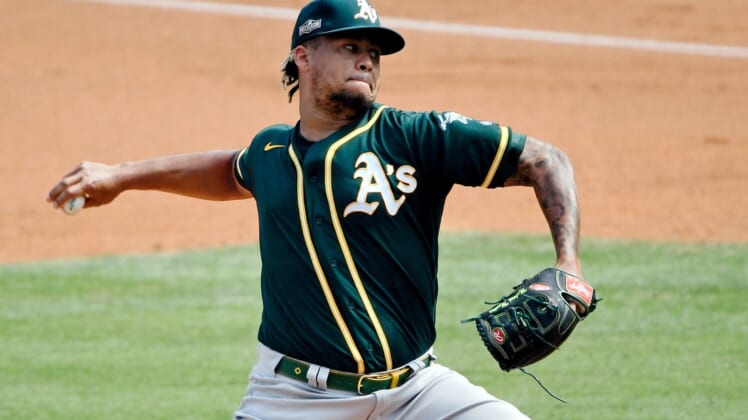 Right-hander Frankie Montas and catcher Sean Murphy were absent due to medical situations when the Oakland Athletics’ pitchers and catchers reported to spring training in Mesa, Ariz., on Wednesday.

Montas tested positive for COVID-19, according to manager Bob Melvin, while Murphy recently underwent surgery for a collapsed lung.

Montas is at his home in Scottsdale, Ariz., and battling the virus, according to Melvin.

“He does feel the effects of it,” Melvin said. “He’s having some symptoms — more flu-like than probably anything else at this point. So unfortunately, he’s going to be a little bit behind.”

The 26-year-old Murphy received quite a scare when he recently awoke one morning and was having trouble breathing. One of the people he called was Melvin.

“He tried to push through it, drank a bunch of water, but within a couple hours he went to the hospital,” Melvin said.

Murphy had the surgery following day, Melvin said. Murphy is slated to return at some point during spring training.

“The prognosis is good,” Melvin said. “He’s recovering well and we expect him to be ready for Opening Day.”

Murphy tied for fourth in American League Rookie of the Year balloting last season when he batted .233 with seven homers and 14 RBIs in 43 games.