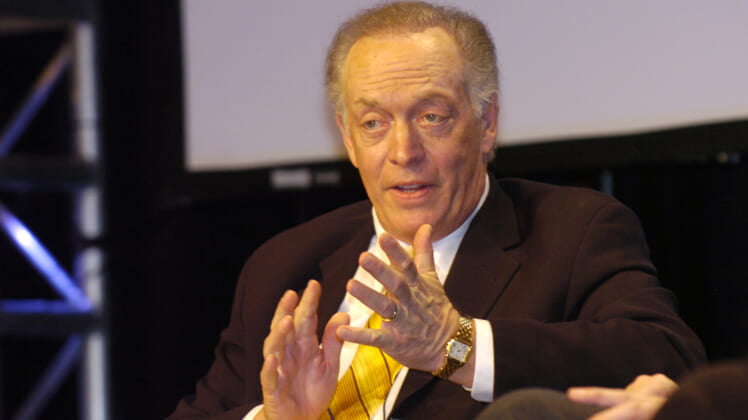 Dick Stockton at the International Press Conference at the Super Bowl XL Media Center in the General Motors Building in Detroit, Michigan on February 3, 2006. (Photo by Al Messerschmidt/Getty Images)

He made the announcement Thursday in a news release issued by FOX Sports, where he’s worked the past 27 years.

“I’ve decided to step aside, enjoying the many memorable events I’ve been blessed to cover, and ready to enjoy doing more things away from the broadcast booth,” Stockton, 78, said. “My 27 years at FOX Sports have been the most rewarding … but I feel there is a time to call it a day and allow the many younger broadcasters the chance to develop their careers, just as I had the opportunity years ago. I have nothing but indelible memories of being part of the sports landscape for over seven decades and will now sit back and watch the future of sports broadcasting unfold.”

Stockton has called at least 1,545 games on network television in the four U.S. sports leagues, which FOX said in a news release is the most of any broadcaster.

He also worked college basketball for FOX and other networks.

“Dick’s contributions to FOX Sports began on day one of our existence and will be felt for years to come,” said Eric Shanks, the network’s CEO and executive producer. “He is a cornerstone of this company whose legacy, talent and hard work helped build the NFL on FOX brand. Growing up as a sports fan, I knew his voice signified a big game, but later working with him, I realized just how big and irreplaceable that voice truly is. Dick will be greatly missed, and we at FOX Sports wish him the best in retirement.”

Stockton, whose career began in 1965 in local radio and TV in his hometown of Philadelphia, is a member of the National Sports Media Association’s Hall of Fame.

He also spent 17 years at CBS Sports and nearly two decades with Turner Sports, announcing NBA and MLB games. He’s called everything from the Olympics to boxing, and he also was the play-by-play announcer for the Oakland Athletics and Boston Red Sox.

He was on the call of six Super Bowls for NFL Network’s international broadcast.