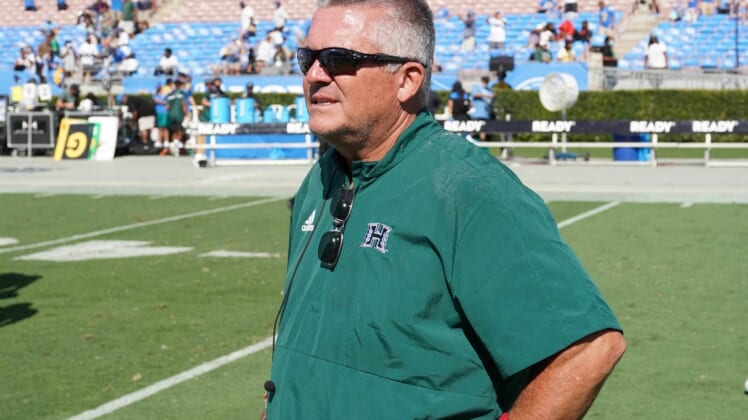 Allegations of mistreatment continue to follow Hawaii coach Todd Graham, with a group of his former players virtually attending a Hawaii state senate hearing Friday to provide testimony about the culture Graham built inside the Rainbow Warriors’ program.

“He’s hands down the worst guy I’ve ever met in my life,” former player Leonard Lee reportedly said of the coach.

As many as 19 players reportedly entered the transfer portal following the end of Hawaii’s season, including starting quarterback Chevan Cordeiro and defensive back Michael Graham — the coach’s son. A number of players took to a Twitter Spaces room in early December to voice their frustrations over Todd Graham’s supposed verbal abuse and favoritism toward first-team players.

It was enough to catch the attention of the state senate, which organized the hearing to gather additional information about the direction and culture of the football program. Hawaii athletic director David Matlin and school president David Lassner were in attendance, and Graham attended at least a portion of the meeting.

The former players and parents of players who testified did so over Zoom. Lee, a former Hawaii defensive back, called Graham a “tyrant” and claimed he would use verbal abuse against his players under the guise of discipline.

Lee also claimed he was kicked off the team for participating in the Twitter Spaces conversation.

Hawaii is 11-11 in Todd Graham’s two seasons as coach. The Rainbow Warriors went 6-7 this season and were slated to play Memphis in the Hawaii Bowl before COVID-19 issues within the program caused the school to pull out of the game.

Graham reportedly said during the hearing that “if I have one player that leaves because of a bad experience, then I’m accountable for that.”