Florida runs over Florida Atlantic with 400 yards on the ground

Florida Gators wide receiver Jacob Copeland (1) is brought down after making a catch during a game against the Florida Atlantic Owls at Ben Hill Griffin Stadium in Gainesville Fla. Sept. 4, 2021. UFfauGameAction22

Emory Jones threw a touchdown pass in his debut as Florida’s starting quarterback, completing 17 of 27 passes for 113 yards.

But backup Anthony Richardson made an impact late in the game, orchestrating a fourth-quarter touchdown drive by going 3-for-3 in the air and rushing for 26 yards on that series. He then sprinted 73 yards for the team’s last touchdown. After a couple more first-down pickups in the last minute, he totaled 160 rushing yards on seven attempts.

Florida ended up with 400 rushing yards on the way to winning its home opener for the 32nd consecutive season.

Davis, who scored on a 1-yard run in the fourth quarter, carried the ball 14 times.

N’Kosi Perry, a transfer from Miami, struggled at times in his first game as Florida Atlantic’s quarterback. He was 19-for-33 for 261 yards in the air.

Pierce ran for a 2-yard touchdown to open the scoring. 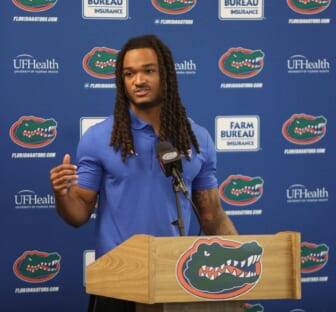 Jones passed 9 yards to Rick Wells for the game’s second touchdown, giving the Gators a 14-0 edge in the first quarter.

They didn’t score again until 6:47 to play in the third quarter when Pierce reached the end zone on a 3-yard run.

The Owls managed only 175 yards of total offense through three quarters. They scored on Johnny Ford’s 2-yard run with 4:27 remaining in the game, cutting their hole to 28-7, and later added the game’s final touchdown when Perry hooked up with Brandon Robinson on a 13-yard play.

Florida improved to 4-0 all-time against the Owls.

Willie Taggart, in his second season as Florida Atlantic’s coach, dropped to 0-3 vs. the Gators. The other two defeats came as Florida State’s coach.