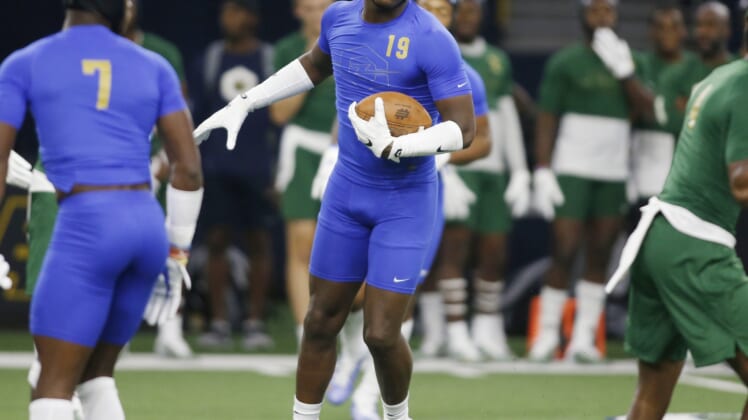 Coming off a big win on Wednesday in the Sugar Bowl, the Georgia Bulldogs are now celebrating another win on Thursday with five-star athlete Darnell Washington announcing that he is joining the Bulldogs.

At halftime during the Under Armour All-America Game, the 6-foot-8 tight end revealed on ESPN2 that he signed his national letter of intent to play for Georgia.

Washington is the No. 10 overall recruit in the country and the No. 1 athlete, per 247 Sports. While he can play defensive end and tight end, it’s expected that he’ll become a weapon on offense in Georgia’s offense.

The Bulldogs desperately needed help at tight end with Eli Wolf and Charlie Woerner graduating. Before Thursday, redshirt freshman John Fitzpatrick was the only tight end under scholarship oN Georgia’s roster/

Washington received interest from dozens of programs. While the Alabama Crimson Tide, Florida Gators, Miami Hurricanes and Tennessee Volunteers were among the finalists, he ultimately followed the opportunity to contribute immediately for a top SEC program.

If quarterback Jake Fromm returns for his senior season, he could be in the perfect position to improve his NFL Draft stock and make this team a championship contender. A combo of Washington and receiver George Pickens, who went off in the Sugar Bowl, would give this team an even better aerial attack than it had this past season.