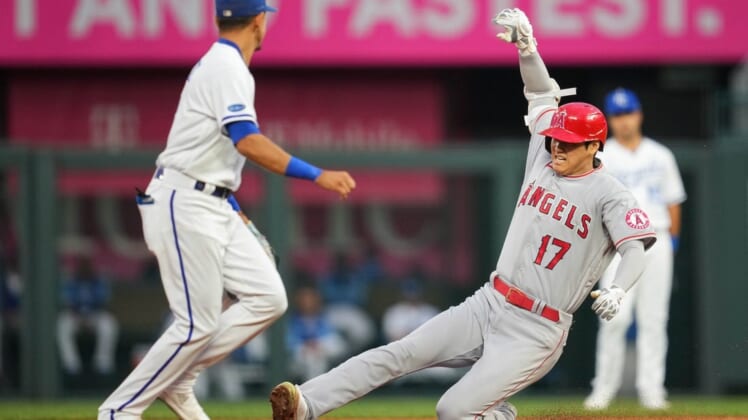 The Royals broke open a one-run game with a four-run seventh inning. A two-run homer by MJ Melendez in the eighth inning put the finishing touches on Kansas City’s third consecutive win.

Both starting pitchers — the Angels’ Noah Syndergaard and Greinke — were sharp through five innings, neither allowing a run.

Greinke had to work his way out of a jam in the fifth after the Angels loaded the bases on a walk, an error and a single with one out and Shohei Ohtani coming to the plate.

However, Greinke got Ohtani to hit a grounder to first, and Phil Gosselin was forced out at the plate. Next up was Taylor Ward, who flied out to center to end the inning.

Syndergaard (5-8) had to work his way out of trouble early, with the Royals going 0-for-6 with runners in scoring position over the first five innings.

Kansas City broke through in the sixth, putting together a rally after there were two outs and nobody on base. Emmanuel Rivera hit a chopper to the hole at shortstop, where Andrew Velazquez fielded the ball but had no play at first.

Nick Pratto followed with a walk, one of his three walks in the game, before Taylor hit the first pitch from Syndergaard into right-center for an RBI single and 1-0 Kansas City lead.

The Royals’ game-breaking four-run seventh was fueled by some shoddy Angels defense that included an error by second baseman Luis Rengifo and a wild pitch by reliever Ryan Tepera.

Kansas City relievers Amir Garrett, Jose Cuas, Scott Barlow and Josh Staumont followed Greinke with one scoreless inning each, with Garrett (2-1) getting credit for the victory.

The Angels lost for the 11th time in 13 games. The contest was the opener of a three-game series.