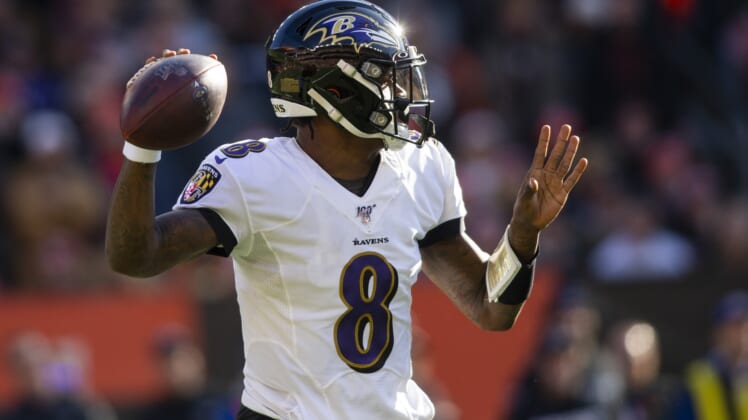 The fantasy football world was taken by storm when a new star in that of Baltimore Ravens quarterback Lamar Jackson topped the charts in 2019.

To the surprise of many, this young second-year quarterback finished No. 1 overall in fantasy points, leaving his competition in the dust. Can he repeat last year’s success again in 2020?

Breaking the bank on Lamar Jackson

Is Jackson worth a first-round draft pick in 2020? Heck yes! Let’s look at last year’s numbers. Jackson was lightning in a bottle, rushing for an average of 80.4 yards per game at a ridiculous pace of 6.9 yards per carry. Compared to running backs last year, Jackson ranked eighth in rushing yards per game. He also scored seven touchdowns on the ground.

Outside of being a stud on the ground, Jackson was not too shabby using his arm last year. He threw for a league-high 36 touchdowns while tossing only six interceptions. Most fantasy leagues typically deduct two points for those nasty picks. Just check in with those who owned Jameis Winston and his league-high 31 interceptions. No thanks.

Moving on to 2020, Jackson’s current average draft position (ADP) stands at 2.09. However, there will be those eager folks come draft day who will jump to take Jackson in the first round. I, for one, am not opposed to this line of thinking. Circling back to last year’s stats, there is nothing wrong with buying high on a guy who finished with the most fantasy points.

While we do not currently know Ravens’ full schedule, opposing defenses are going to have their hands full stopping this young quarterback this fall. Even if Jackson’s numbers take a slight turn downward in 2020, it is difficult to envision him falling outside of a top-five fantasy scorer this upcoming season.

Moving on to another tier of young quarterbacks, let’s explore Allen, Murray and Goff. They finished seventh, ninth and 17th among quarterbacks in fantasy points last season.

While Goff ended 2019 with a passing-yard total that severely padded his fantasy stats, his declining touchdown production and high number of interceptions did not help anyone. Therefore, his current ADP stands at a lowly 11.02 for 2020.

As for Murray last year, he passed for the 15th-most yards and his numbers on the ground helped keep him within the top-10 fantasy quarterbacks. His current ADP is projected at 6.09.

When it comes to Allen, his production on the ground helped him tremendously last year. However, he ranked 23rd among his fellow quarterbacks in passing yards. With that said, Allen’s current ADP is 9.03.

In comparing these three fantasy quarterbacks, Murray’s first-year history and his potential to improve on his rookie numbers keep him at the top of this conversation for 2020. A good group of receivers will also help keep the fantasy spoils coming.

Meanwhile, if Allen’s passing numbers improve, watch out. He will be worth much more than a ninth-round pick, provided his rushing yards and touchdowns do not drastically decline.

As for Goff falling to the bottom of this heap as a projected 11th-round pick, he does possess plenty of upside for those who throw a late dart at him. This is a quarterback who threw for 32 touchdowns in 2018 compared to those 22 last year. If Goff can cut down on his interceptions and utilize his talented group of wide receivers, he will out-perform his ADP by a lot.

Looking at 2020, Murray is primed to be the best option of the three. People will surely select him well ahead of his current 6.09 ADP. Allen’s No. 7 finish last year will have him being snagged before his 9.03 ADP. Goff is going to fall because of his performance last season. However, he has the potential to finish inside of the top 10 just as he did in 2018.

Are Austin Ekeler and Keenan Allen still keepers now that the Chargers have said goodbye to Philip Rivers?

We are not sure at this time who is going to be slinging the pigskin in 2020 for the Chargers now that Rivers has departed. If it is a rookie quarterback the team attempts to play, then said quarterback would lean a lot on Ekeler. If you play in a league that gets points for catches, Ekler is a keeper. He racked up 92 receptions for 993 yards and eight receiving touchdowns last season. Ekeler could prove to be his new young quarterback’s go-to guy.

Let’s just say Tom Brady lands with the Chargers. Ekeler would be Brady’s “James White” type of player to lean upon. White drew 95 targets last year. As for Ekeler, his value also skyrockets if Melvin Gordon parts ways with the Chargers.

When it comes to Allen, his production might decline. A seasoned veteran such as Brady would keep Allen relevant. However a younger, less-experienced quarterback might not be able to make those big plays which equate to Allen racking up points.

He might be a sell after finishing 2019 as the 11th-ranked receiver and depending on who the Chargers go with at quarterback.

For the love of touchdowns, FFC