Family Confirms Ken Stabler Has Passed Away at 69 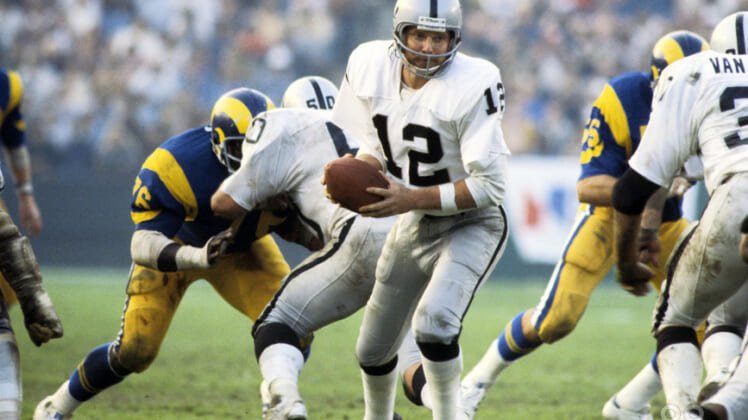 Despite a premature report earlier in the day that led to confusion surrounding the status of former NFL quarterback Ken Stabler, his family has confirmed that the all-time great passed away on Thursday at the age of 69.

Stabler, 69 at the time of his death, was a monumental figure in both Alabama and Northern California.

“The Raiders are deeply saddened by the passing of the great Ken Stabler,” Davis said, via team’s official website. “He was a cherished member of the Raider family and personified what it means to be a Raider. He wore the Silver and Black with Pride and Poise and will continue to live in the hearts of Raider fans everywhere. Our sincerest thoughts and prayers go out to Kenny’s family.”

Stabler first made his name known as the starting quarterback for the Alabama Crimson Tide under legendary head coach Paul “Bear” Bryant who recruited the quarterback himself in 1964. Stabler sat as a freshman, watching Joe Namath lead the program to the National Title before taking over the reigns the following season. Together with fellow quarterback Steve Sloan, Stabler became encased in Crimson Tide football history by leading the team to the second of back-to-back titles.

He was then drafted in the second round of the 1968 draft by then Oakland Raiders co-owner and general manager Al Davis. From 1973-1979, mainly under the leadership of head coach John Madden, Stabler led the Raiders to a 68-25-1 record and one Super Bowl title. He was named the AFC Player of the Year in 1974 and 1976 and earned NFL MVP honors in 1974.

While Stabler did finish his NFL career with more interceptions than touchdowns, which was common for that era, he was among the most-successful on-field quarterbacks of his time. Despite this, Stabler was never inducted into the Pro Football Hall of Fame—a fact that remains a travesty to most football historians.

A favorite of Raider Nation, the respect Stabler earned throughout his career and post-NFL life made him one of the most popular players in Northern California history.

In talking to fellow Hall of Fame snub and former Stabler teammate Cliff Branch years back, the respect his teammates had for him was obvious. Branch told me a story of a quarterback that was just one of the guys—someone that would go to bat for his teammates no matter what.

Stabler’s death was unexpected to the masses. The family announcement did include a recognition that Stabler succumbed to colon cancer. Still active around the football world and within the Raiders organization, few saw this coming.

Following his football career Stabler was an announcer for CBS Sports and called Alabama games on the radio. Though, he was never far from what was going on with his former team in both Los Angeles and Oakland.

It truly is a sad day.