Emotional Lee Elder at Masters: ‘My heart is very soft’ 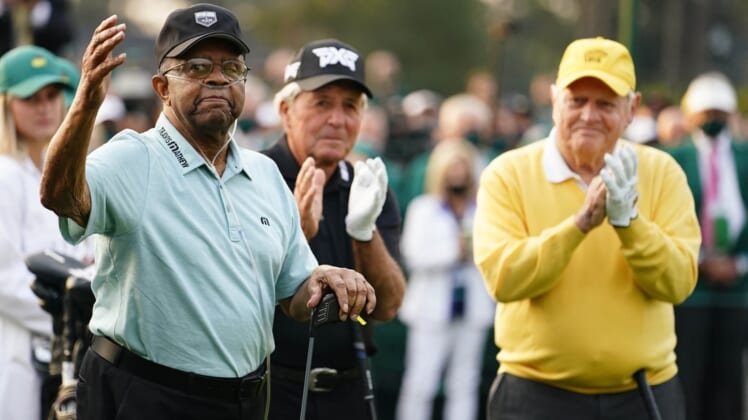 An emotional Lee Elder joined Jack Nicklaus and Gary Player at the first tee to begin the 85th edition of the Masters on Thursday in Augusta, Ga.

While Elder, 86, didn’t participate in the ceremonial opening tee shot because of health issues, the four-time PGA Tour winner shared his feelings when speaking during a news conference.

“My heart is very soft this morning, not heavy soft, soft because of the wonderful things that I have encountered since arriving here on Monday and being able to see some of the great friends that I have made over the past years, especially like these two gentlemen that are here,” Elder said of Nicklaus and Player.

“We have competed against each other, and we have certainly enjoyed a lot of pleasant moments. I just want to say thank you so very much to have me here. It’s a great honor, and I cherish it very much, and I will always cherish it, and I want to thank the chairman for extending me this great privilege.”

Elder, who used a cane to walk and an oxygen tank to help him breathe on Thursday, was the first Black player to participate in the Masters in 1975.

Nicklaus and Player each took a traditional swing onto the fairway at the Augusta National Golf Course to start the Masters, surrounded by former Masters winners and current players.

“I was kind of astonished when that was announced that a Black player hadn’t played because Lee had certainly played well enough, and he had Teddy Rhodes before him and he had Charlie Sifford before him and fellows who could well have played, been invited to the Masters,” Nicklaus said. “I thought it was long overdue when he finally got invited.”

The Lee Elder Scholarships will be endowed at Paine College, a Historically Black College and University in Augusta. The scholarships will be given each year to one golfer on the school’s men’s golf team and one on the women’s team.