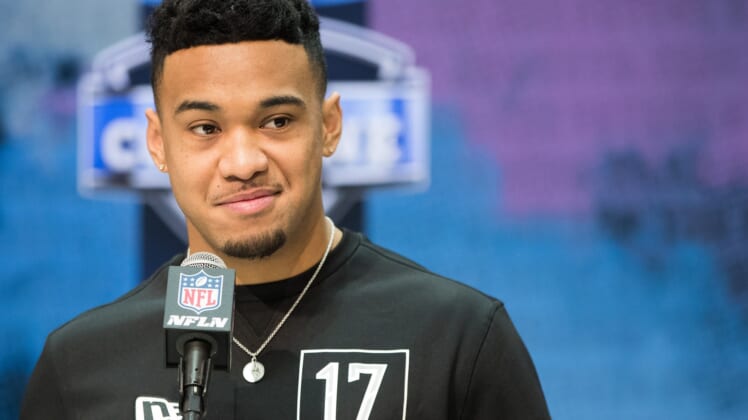 The start of training camp is right around the corner and when practices begin, Miami Dolphins quarterback Tua Tagovailoa will be alongside his teammates getting ready for the 2020 NFL season.

Just eight months after Tagovailoa suffered a dislocated hip in his final game for the Alabama Crimson Tide, the 22-year-old received the news he was waiting for this week.

Tagovailoa, the No. 5 overall pick in the 2020 NFL Draft, has spent months rehabbing and working hard to get back on the field. After telling reporters this past week he is ready to go, Dolphins head coach Brian Flores confirmed the news on Wednesday.

The young star’s recovery from a major surgery is nothing short of miraculous. In the hours following his devastating injury, many feared his NFL career and a promising future were in jeopardy.

Fortunately, Tagovailoa’s work ethic and determination since the surgery have paid off. When the Dolphins hit the practice field to prepare for the upcoming season, their franchise quarterback will be joining them.

Will Tua Tagovailoa start for the Dolphins this year?

It will be more difficult than ever, if not impossible, for Tagovailoa to win Miami’s starting quarterback gig to begin the 2020 season. While he is now fully recovered, the elimination of the preseason puts him at an even greater disadvantage this summer.

As of now, Ryan Fitzpatrick is expected to start for the Dolphins in their regular-season opener. Not only did he play well for them this past season, but his vast experience in the NFL and familiarity with offensive coordinator Chan Gailey give him a huge advantage.

We likely won’t see Tagovailoa take the field early in the 2020 season. Given the Dolphins are unlikely to compete for a playoff spot this season, though, expect him to earn his starting spot later in the year.