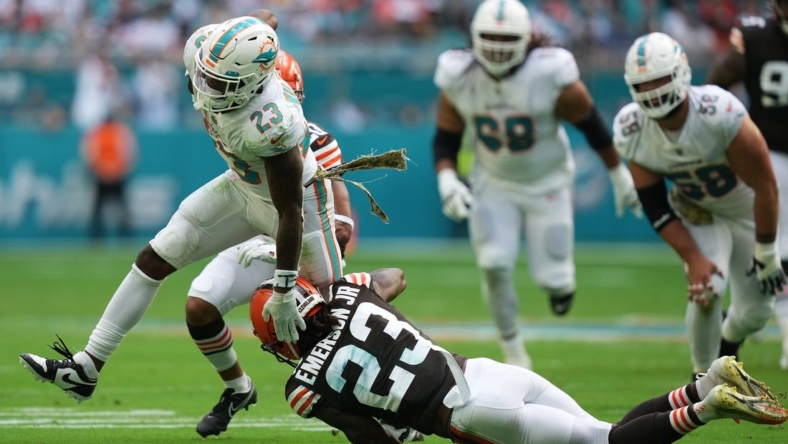 Jeff Wilson led a potent rushing attack with 119 yards and a touchdown on 17 carries as the host Miami Dolphins crushed the Cleveland Browns 39-17 on Sunday afternoon at Miami Gardens, Fla.

The Dolphins (7-3) head into their bye week on a four-game winning streak after shutting down one of the NFL’s best running games.

The Browns (3-6) finished with 112 yards on the ground, but most of that came when Nick Chubb broke a tackle and raced down the sideline for a 33-yard touchdown that cut Miami’s lead to 30-17 with 13:09 remaining in the game.

Chubb finished with 63 yards on 11 carries but was held under 100 yards for the fourth time this season. Miami has not allowed a 100-yard rushing game this season.

Raheem Mostert added 65 yards and a touchdown on eight carries for the Dolphins, who totaled 491 total yards, with 195 of those on the ground.

As Dolphins fans chanted “M-V-P, M-V-P,” quarterback Tua Tagovailoa completed 25 of 32 passes for 285 yards, three touchdowns and no interceptions for a 135.0 passer rating.

Tyreek Hill caught five passes for 44 yards and one of those touchdowns, while Trent Sherfield caught four passes for 63 yards and a touchdown. Fullback Alec Ingold caught the other Tagovailoa touchdown pass. Miami’s Jaylen Waddle added four catches for 66 yards.

It was the first game in which the Dolphins did not attempt a punt since 2003.

The Dolphins’ defense recorded three sacks as Christian Wilkins and Melvin Ingram each had one.

On the injury front, Dolphins’ defensive end Emmanuel Ogbah (elbow) and Keion Crossen (shoulder) both left the game in the first half and did not return.

Cleveland safety D’Anthony Bell (concussion) exited the game in the first half and did not return.