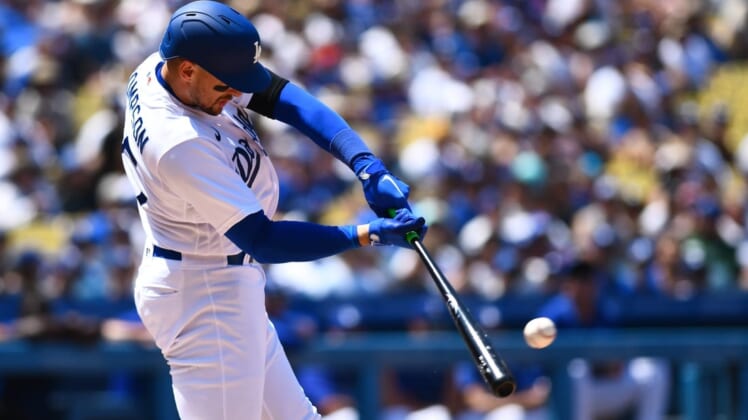 Jake Lamb drove in the go-ahead run with a seventh-inning double, while Gavin Lux and Trayce Thompson each drove in two runs as the Los Angeles Dodgers finished off a four-game sweep of the visiting San Francisco Giants with a 7-4 victory Sunday.

Lamb, Lux and Thompson each drove in runs in the seventh inning against Giants right-hander Tyler Rogers to break a 4-4 tie. The Dodgers increased their winning streak to a season-high eight games despite getting just 4 1/3 innings from All-Star left-hander Clayton Kershaw.

Darin Ruf hit a two-run home run and Thairo Estrada drove in two runs for the Giants, who fell to 0-6 at Dodger Stadium this season. San Francisco had gone into the All-Star break winning five of six games.

The Dodgers got off to a fast start with three consecutive singles to open the game against Alex Cobb. Mookie Betts singled to right field, Trea Turner singled to left and Freddie Freeman made it 1-0 with his own single to right.

The Giants took a 2-1 lead in the third inning on Estrada’s two-run single to left against Kershaw.

The Dodgers went back in front in the bottom half of the frame. Lux had an RBI single and Max Muncy gave Los Angeles a 3-2 lead with an RBI double. Thompson made it 4-2 on a single to center. All three run-scoring hits came with two outs.

San Francisco tied it 4-4 in the fifth inning when Wilmer Flores doubled and Ruf hit a home run to left to knock Kershaw from the game.

Kershaw, the National League’s starter in the All-Star Game, gave up four runs on five hits with two walks and six strikeouts. Evan Phillips (5-3) pitched a scoreless seventh inning to earn the win and Craig Kimbrel pitched the ninth for his 17th save.

The Dodgers’ three-run seventh inning started when Yermin Mercedes misplayed Freddie Freeman’s double into the left-field corner off Dominic Leone (3-3). Lamb doubled for the 5-4 lead and Lux singled him home.

Thompson’s RBI double to right-center made it 7-4 and the hit drew a celebration from his brother, Klay Thompson of the Golden State Warriors, who was sitting behind the Giants’ dugout.