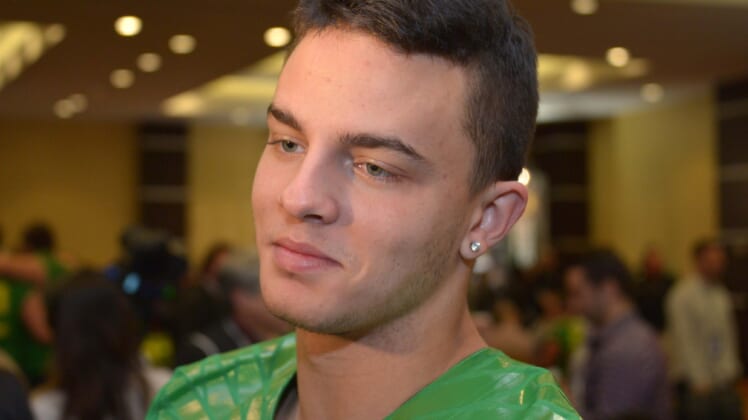 Devon Allen has his sights set on gold. And unfortunately for the Oregon Ducks, that means he’s no longer going to be a football player.

The speedy wideout from Phoenix, Ariz., announced on Wednesday that he’ll be forgoing his senior season with the Ducks in order to focus on professional track. Allen is a 110-meter hurdle star, and he actually performed in the event in the Rio Olympics this past summer. He finished fifth in Rio and will be looking to focus on running now in an effort to get ready for the 2020 Tokyo Games.

“My scenario is to run track for the next couple years and then in 2020 Olympics win a gold medal and have the world record,” Allen said, via Chantel Jennings of ESPN.com. “And then put that to the side and try to play football. I think that’s the ideal scenario.”

Allen is a good football player and he does have NFL potential thanks to his speed and athleticism, but the game hasn’t been exactly kind to him. He suffered an ACL tear in Oregon’s 35-32 loss to Nebraska earlier this season, which was the second ACL tear of his Oregon career. He was also injured against Florida State in the 2014 Rose Bowl.

Despite his knee problems, Allen went on to compete in Rio and it looks like football could still be in his future after the 2020 games. Of course, that’s a long time from now and that’s assuming that 1) he heals up completely from his latest ACL tear and 2) he still wants to play football.

As of right now, Jennings reports that Allen would still be interested in the NFL — he just won’t seriously consider it until after Tokyo. Jennings also reports that Allen’s plan is to stay in Eugene to train. He’s planning on graduating this summer and is also going to be competing in the USATF Championships this June.

Allen finishes his Duck football career with 54 catches for 919 yards and eight touchdowns.